An international team led by scientists from the United States and New Zealand have observed, for the first time, the bizarre deep-sea communities living around methane seeps off New Zealand’s east coast.

Tangaroa deploying the benthic grab in front of the Kaikouras.

‘This is the first time cold seeps have been viewed and sampled in the southwest Pacific, and will greatly contribute to our knowledge of these intriguing ecosystems,’ says Dr Amy Baco-Taylor, from the Woods Hole Oceanographic Institution (WHOI) in Massachusetts, who co-led the voyage with Dr Ashley Rowden from NIWA.

The 21-member expedition – led by scientists from WHOI, NIWA, the Scripps Institution of Oceanography, and the University of Hawaii at Manoa (UH) – has spent the last two weeks exploring cold water seeps and other ‘chemosynthetic’ ecosystems around New Zealand’s east coast onboard NIWA’s deepwater research vessel Tangaroa.

Cold seeps are areas of the seafloor where methane gas or hydrogen sulphide escapes from large stores deep below. Like hydrothermal vents, cold seeps support unique communities of animals living in symbiosis with microbes that can convert these energy-rich chemicals to living matter (a form of ‘chemosynthesis’) in the absence of sunlight.

New Zealand is one of the few places in the world where at least four types of chemosynthetic habitats occur in close proximity, allowing scientists to address key questions about the patterns of biological distribution that cannot be addressed elsewhere.

The team visited eight cold seep sites on the continental slope to the east of the North Island, lying at depths of 750–1050 m.

‘We discovered that one of these sites, “The Builder’s Pencil”, covers about 180 000 square metres (0.18 square kilometre), making it one of the largest seep sites in the world’, says Dr Rowden.

A few cold seep sites were previously known along the New Zealand coast from geological and biogeochemical studies of the continental margin. But this is the first time the biodiversity of the animal communities living at these sites has been observed directly and thoroughly documented, providing the first discovery of cold seep communities in the entire southwest Pacific.

‘The nearest known cold seep communities that have been biologically described are off Chile and Japan. The seeps off New Zealand are also remarkable in the sheer extent of their chemosynthetic communities,’ says Dr Baco-Taylor.

The team pinpointed potential seep sites using sophisticated sonar to map seafloor topography and substrate and to detect plumes of methane-enriched water. The scientists then lowered a towed video and still camera system over each site to identify seep organisms and the extent of the seafloor they covered.

With the live video feed, the scientists observed 30–40 cm long tube worms emerging from beneath limestone boulders and slabs lying at the core of the seeps. Around the rocks were patches of blackened sediment and pockets of white bacterial mats. Most sites also had extensive shell beds consisting of live and dead shells of various types of clams and mussels. These were fringed with stands of another type of deep-sea tube worm that is also gutless and relies on symbiotic bacteria for its nutrition. Corals and, at two of the sites, numerous sponges, were also observed.

‘We’ve collected samples of the animals living around the seeps for formal identification, but the distance to previously studied cold seeps implies that there are several species new to science among these new collections,’ says Dr Rowden.

The team has also collected samples of the sediment and water surrounding the seeps for chemical analysis and used sonar to study the geological structures lying beneath them.

The discovery of so many sites suggests that cold seeps are very abundant along New Zealand’s eastern continental margin. However, this expedition also revealed the extent to which these communities may face serious threats from human activities. At all of the seep sites, there was evidence of fishing damage in the form of trawl marks, lost fishing gear, and extensive areas of deep-sea coral rubble.

This voyage was jointly funded by the US National Oceanographic and Atmospheric Administration’s Office of Ocean Exploration (NOAA OE) and NIWA, with additional support from WHOI, Scripps, and UH. 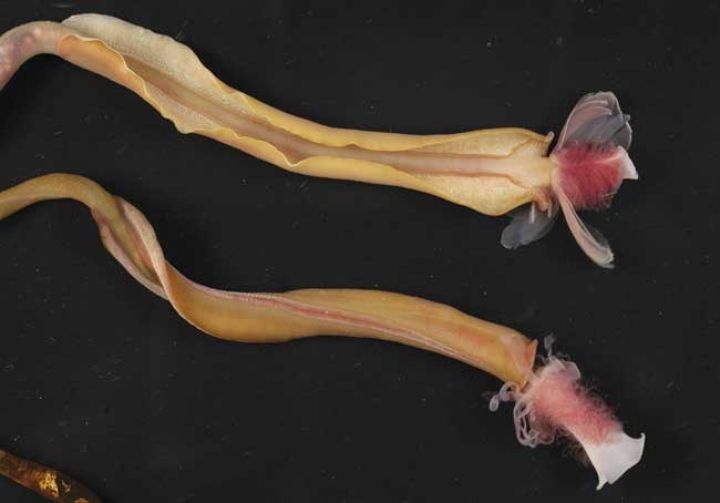