Scientists thought they had seen the last of a drifter buoy lost during an experiment in the Southern Ocean in 1999. But to their amazement, the buoy has turned up halfway around the world in the Falkland Islands – albeit looking a little worse for wear. 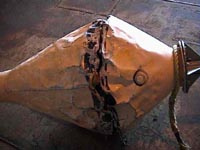 NIWA scientist Cliff Law said he was surprised when Dr David Middleton, a fisheries scientist with the Falkland Islands Government, contacted him to say that the buoy had been found. Dr Middleton had written an article a couple of months ago in the local Falklands paper, The Penguin News, on recovering buoys lost at sea. That prompted a farmer to contact him to say he had found a buoy washed up on a beach at the southern tip of West Falkland. The buoy, which appeared on New Year’s Day, 2001, turned out to be the same buoy lost by NIWA in 1999.

The buoy had taken 693 days to travel 8700 kilometres east from where it was first deployed, at an average speed of 13 kilometres a day.

‘The buoy was originally sent to New Zealand by Plymouth Marine Laboratory in the UK for the multi-national Southern Ocean Iron Enrichment Experiment (SOIREE). The aim was to test whether phytoplankton [microscopic marine plants] in the Southern Ocean don’t grow to their full potential because of a lack of iron. To test this, we released dissolved iron into the ocean from our research vessel Tangaroa and used the buoy to follow the “iron patch”.’

Dr Law said that after the buoy was deployed 600 kilometres off Antarctica, south of Tasmania, it stopped communicating with the ship almost immediately. They were hopeful of retrieving it during the course of the experiment, but this was not to be. However, a month later the buoy started transmitting to the satellite again, enabling the scientists to track it for four months before they lost track of the signal again.

‘We were actually very lucky as the four months of data proved invaluable. By locating the position of the buoy on satellite ocean colour images, we saw that the iron was still influencing the phytoplankton five weeks after its release. A 150-km green ring of chlorophyll, which is the main pigment used by phytoplankton to absorb the sun’s energy for growth, could be seen from space.

‘This not only showed that the iron was more persistent than previously thought, but it also provided conclusive evidence of how water mixes in the upper ocean.’

The buoy was recently transported to Port Stanley in the Falklands. Dr Law said the electronics were too badly damaged to make sending it back to the UK worthwhile. ‘However, it’s impressive that it landed on the Falklands on its first lap, otherwise it could have been circling Antarctica for decades.’