When you are at the beach this summer, don't be surprised if you're swimming next to a sea snake with a paddle for a tail, a big-headed-turtle, or a magnificently coloured flat-faced fish. New Zealand's got its share of weird and wonderful marine visitors. Several species of sea snake and turtle regularly reach our waters.

Yellow-bellied sea snakes, Pelamis platurus, are highly venomous, usually found in warm waters, and are not endemic to New Zealand. But they regularly wash up on North Island beaches.

"They live near the surface, hang around with logs and drifting seaweed, and feed on the fish that aggregate in those areas," says NIWA principal scientist Dr Malcolm Francis.

All sea snakes are poisonous, but generally require a lot of provocation before they will bite. Their mouths are small and fangs are set well back, making it hard for them to bite a human.

This sea snake is related to the cobra, and has a pair of fangs that inject venom into its victim. After biting its fish prey, the snake will eat it head first. It has four teeth that hold the prey in place as it swallows it.

The yellow-bellied sea snake lives in the open sea and travels with surface ocean currents. It has a paddle-like tail that enables it to swim well.

Most of the recorded sightings of snakes in the New Zealand region, over the summer months, are from the northeast of the North Island. They have occasionally been spotted as far south as Cook Strait.

When you are swimming in the sea, don't be alarmed, either, if you find that you are swimming next to one of five types of sea turtle. The leatherback turtle, Dermochelys coriacea is the largest. You might also spot the loggerhead turtle, Caretta caretta,; the green turtle, Chelonia mydas; the hawksbill turtle, Eretmochelys imbricata; and the olive ridley turtle, Lepidochelys olivacea.

Leatherback turtles grow to at least three metres long and occasionally get tangled in buoy lines. As their name suggests, they have a leathery carapace on their backs instead of a hard shell.

Loggerhead sea turtles are named for their large heads, which support powerful jaws and enable them to feed on hard-shelled prey.

The loggerhead is found in the Atlantic, Pacific, and Indian oceans and the Mediterranean Sea. When fully grown, it measures up to 2.7 metres in length.

Loggerheads are considered an endangered species and are protected by the International Union for the Conservation of Nature. Most loggerhead deaths are caused by fishing.

"Interestingly, some turtle species sleep under ledges in the sea. "They are air breathers who can dive for at least half an hour," says Dr Francis.

Many turtle species make huge oceanic migrations and come back to the same beach each year to lay their eggs.

If running into sea snakes and giant turtles isn't enough for you, watch out for a visitor of great beauty, and something that could come as quite a surprise if you are out doing some recreational fishing. The dolphin fish (mahi-mahi), Coryphaena hippurus, has beautiful colours and an unusual blunt head.

Dolphin fish are subtropical, and seen only in northern New Zealand waters in summer. When on the line it has good fighting ability, and tasty flesh if you successfully catch it.

The dolphin fish is a brilliant turquoise, with green and yellow patterns, and irregular blue or gold blotches scattered over its sides. These fade as it dies.

"They flash in the water with rainbow-like colours when caught, as they are dying," says Dr Francis. They are usually found only in open ocean waters, along the north east coast of the North Island."

The strange thing about these very blunt-headed fish is that the male's head is virtually vertical, while the female's is slightly more sloping.

They have a single dorsal fin that runs the entire length of its body. 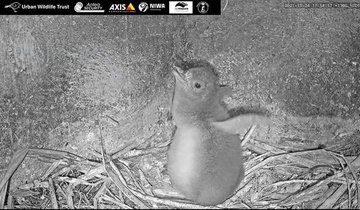