NIWA transported the ITP to Antarctica. It was deployed by NIWA scientist Craig Stewart, and IRL’s Tim Haskell. The very first set of data from below the ice was sent via satellite on 19 November 2010.

It will provide NIWA with the first-ever year-round data set of what is happening beneath the ice in McMurdo Sound. The ITP collects temperature and salinity profiles. This information is relayed in real-time, via satellite, to the Woods Hole Oceanographic Institute website.

“This will lead to a better understanding of the interactions between the ice sheet, the oceans, and what contribution this is making to sea-level rise. We are trying to understand how the ice shelf interaction is changing over time,” says NIWA oceanographer, Dr Mike Williams.

Predictions for the next century could see Antarctic annual mean sea ice decrease by 24%, so it is important that interactions between sea ice and both atmosphere and ocean are understood.

“The Ross Sea is fresher than it was 30 years ago, because the Antarctic ice sheet has been melting, and putting more freshwater into the ocean,” says Dr Williams.

“The warmer the water, the faster the ice melts, so what we are starting to see is warmer parcels of water making their way to the coast, and starting to increase the ice-shelf melt in coastal Antarctica.”

Polar regions are where climate change is happening most rapidly. “It’s well understood in the Arctic, but in Antarctica we don’t really understand why we are not getting the same response. Our measurement programmes are decades behind what’s happening in the Arctic, and the ITP gives us a chance to start catching up,” says Dr Williams.

The ITP was developed by Woods Hole Oceanographic Institute, funded by NIWA, and its deployment is supported by Foundation for Research, Science and Technology, and Antarctica NZ. It is the second ITP to be deployed in Antarctica.

NIWA CEO John Morgan will be on the ice 24-26 November as part of the Antarctica New Zealand Invited Visitor programme.

How does the ITP work?

The ITP consists of a surface capsule that sits on top of a large area of ice floating on the surface of the sea. It supports a plastic-jacketed wire rope tether that extends through the ice, and down into the ocean. It is weighted at the bottom. A cylindrical underwater instrument mounts on this tether and cycles vertically along it, carrying oceanographic sensors through the water column. 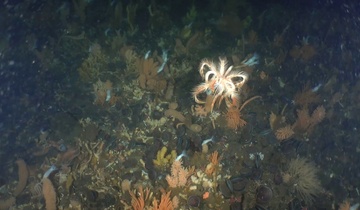