NIWA says snow storm was exceptional south of the Rakaia

NIWA has released a preliminary report into the severity of the 12 June 2006 snow storm in Canterbury and North Otago. The report was commissioned by Orion New Zealand Ltd. 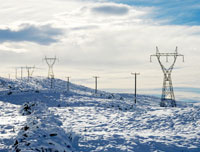 The report finds that the snow in the Canterbury plains and foothills south of the Rakaia was as deep as the July 1945 snow storm which produced very heavy snowfall down to sea level. In some places, last month’s snow was even deeper.

NIWA estimated snow depths across the entire region and compared these to published information on six previous extensive snow storms in Canterbury.

North of the Rakaia River, snow depths were significant but not unprecedented

Coastal plains: In the coastal plains areas (north of the Rakaia) the snow was much deeper than the 1992, 1973, or 1967 snow storms, except in Christchurch where the 1992 snow storm was much more severe.

South of the Rakaia River, snow depths were extreme in places

Canterbury plains: This area experienced exceptional snow depths. The 12 June snow storm produced greater snow depths than the 1973 and 1967 snow storms. Snow depths throughout this area were similar to the 1945 snow storm and in some areas much deeper. Ashburton had the greatest maximum snow depth on record.

Inland areas: The area around Fairlie and Burkes Pass had similar snow depths to the 1973 storm, while areas further west into the McKenzie Basin had significantly less snow than most previous notable snow storms with only 50cm being recorded at the Hermitage, as opposed to over 100cm in 2002, 1973, and 1967.

This report is available for public access courtesy of Orion (NZ) Ltd:

Method used in this report

We compared the 12 June event to six previous snow storms in Canterbury: 1945, 1967, 1973, 1992, 1992, and 2002. Many early records of severe weather events in NZ are sketchy and it is difficult to rank these in order of importance. Our choice of these six events was based on the availability of reliable information and extent of coverage across Canterbury.

To estimate the snow depth across Canterbury and North Otago for this storm, we started with measurements of snow depth from 53 points. Most of these measurements were taken by NIWA’s network of climate observers, supplemented by information from the Waimate District Council and others. We then used the data to interpolate a maximum observed snow depth across the region.

For this preliminary report, we did not account for the effects of topography. Additional data available mid to late July would make it possible to construct a more detailed map of the snow depth taking account of topography and associated effects.

What was the return period of this event?

It is not possible to estimate a return period with any reasonable level of accuracy without better data about a greater number of past snow storms. In many cases the historical records are incomplete and occasionally unclear. We are hoping to calculate a return period, and associated error band, in a future study.