NIWA says greenhouse gas methane is on the rise again

The concentration of methane in the atmosphere is rising, according to measurements made by NIWA.

NIWA has today released measurements from its globally significant Baring Head station showing that southern hemisphere atmospheric methane increased by 0.7% over the two-year period 2007–08. While this increase may not sound like much, it is about 35 times more than all the methane produced by New Zealand livestock each year.

This is significant in that it follows a three-year period of no growth, and accounts for more than half of the growth observed over the ten years 1999–2008 (1.2%). Methane is the second most important contributor to global warming behind carbon dioxide, though its abundance in the atmosphere is far lower. Additional methane traps twenty one times more heat over 100 years than the same mass of carbon dioxide (CO2 ).

“The evidence we have shows that methane in the atmosphere is now more than double what it ever was during the 800,000 years before 1700AD” says NIWA Principal Scientist, Dr Keith Lassey. This is based on analyses of ancient air trapped in polar ice that has been extracted and dated.

The trends observed by NIWA at Baring Head are consistent with global trends. It is the global atmospheric concentration of greenhouse gases that determines the risk of climate change. The US National Oceanic and Atmospheric Administration (NOAA) reported that global methane concentrations rose in both 2007 and 2008 after a ten-year lull.

NOAA report that drier than normal conditions in the tropics from 1999–2006 probably limited emissions from microbes in tropical wetlands while from 2007 wetter tropics and warmer Arctic conditions have led to increased emissions overall. The wetter tropics were at least partly a result of a La Niña weather pattern of 2007 and 2008.

Methane, also known as marsh gas because of its widespread production in marshes and other wetlands, is a naturally occurring greenhouse gas. It is produced mainly by biological breakdown of organic substances in oxygen-deficient conditions, such as the digestive system of ruminant animals and the decay of plant material in swamps or landfills. It is also prevalent in fossil fuel reservoirs—coal, oil, and natural gas (which is mainly methane).

Each year about 12% of the methane in the atmosphere is removed by oxidation triggered by sunlight, and a small amount is consumed by soil bacteria. Methane growth in the atmosphere occurs when those removals are exceeded by new emissions. 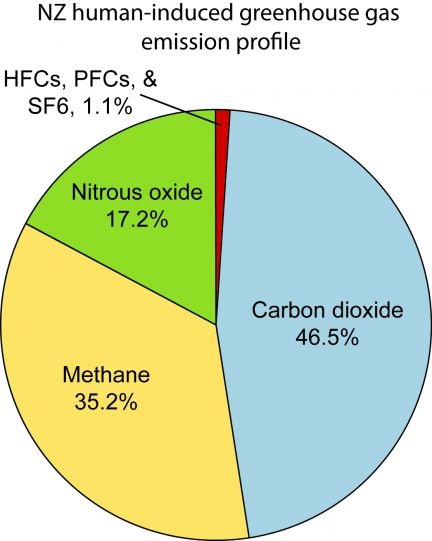 NIWA has some of the key measurement stations in the world for measuring greenhouse gas emissions in the southern hemisphere: Baring Head near Wellington, Lauder in Central Otago, and at Scott Base in the Antarctica.

Measuring methane involves taking air samples in flasks for analysis in the laboratory.

NIWA staff take samples at Baring Head during southerly conditions, because the air collected is unaffected by local sources and representative of atmospheric gases over a wide region of the ocean to the south of New Zealand.

NIWA’s trace gas laboratory in Wellington is internationally renowned for the extraction and analysis of trace gases. The atmospheric methane measured at Baring Head near Wellington since August 1989. The graph shows the methane mixing ratio in parts per billion (molecules of methane for every billion molecules of dried air). Methane concentrations grew strongly in the 1990s then tailed off. There was even a hint of declining concentrations (negative growth) for 2003-06. Growth resumed in 2007 and appears to be persisting.

NIWA says greenhouse gas methane is on the rise again