Devilrays – divers of the deep

A successful electronic tagging project means scientists have made some important discoveries about spinetail devilrays.

Devilrays are the smaller cousins of the giant manta ray, both of which are protected species in New Zealand waters. They have a wingspan of at least 3.1m, compared to 7m for the giant manta.

NIWA scientist Malcolm Francis is presenting the results of the tagging project at the New Zealand Marine Sciences Society conference in Auckland this week.

NIWA and the Department of Conservation have been working with the fishing industry and observers from the Ministry for Primary Industries to tag devilrays accidentally caught in purse seine nets used to catch schools of tuna.

The aim of the tagging project, undertaken between January and April over the past three years, was to determine whether the devilrays survive the catching process and to learn more about their distribution and behaviour.

Devilrays are only present in New Zealand waters during summer and little is known about where they spend the rest of the year or how far they move.

Most are caught near of the edge of the continental shelf between Great Barrier Island and the Bay of Islands.

“They are animals of the open ocean and don’t often come inshore, but they gather along the edge of the shelf probably to feed on swarms of planktonic shrimp-like creatures called euphausids,” Dr Francis said.

“We also wanted to know how they use the water column – do they stay near the surface or do they dive deeper?”

Nine devilrays were tagged with electronic “pop up” tags that gather information on depth and temperature. Some also record light which can be used to estimate location.

After a pre-determined time, the tags pop up to the surface where they transmit data to satellites.

Dr Francis said that seven of the nine tags returned data, and of those, four died within four days.

“All the rays appeared healthy when released and they swam off rapidly, but it appears that the capture process may sometimes cause fatal physiological stress."

More research will now be carried out to try to work out what stages of the capture process are most stressful and scientists will work with the fishing industry to try and minimise the impact of fishing.

Meanwhile, among the data transmitted were some exciting findings. Two of the surviving rays moved rapidly north – one travelling nearly 1800km to Vanuatu and the other 1400km to south of Fiji, each covering about 50-60km a day.

“This suggests that devilrays may migrate annually between the islands of the South Pacific and northern New Zealand. The third ray spent almost three months near the shelf edge off the north east of the North Island during summer, but its tag popped up before it migrated,” Dr Francis said.

The rays also made several deep sea dives. While they spend most of the time in the top 50m of water, they occasionally they go much deeper. The previous deepest recorded for the species was 445m off the coast of Mexico. However, the three surviving rays reached maximum depths of 649, 1000 and 1112m.

Dr Francis said the deep water dives were related to feeding behaviours and probably brought them in range of deepwater prawns and small fishes.

MPI strongly supports this research, which is closely aligned with its National Plan of Action for the Conservation and Management of Sharks. 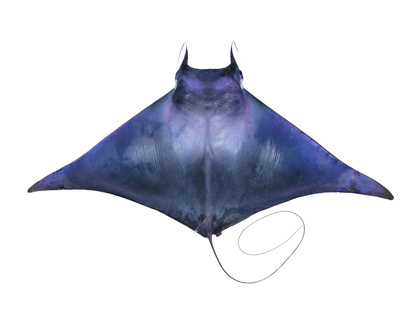