On dark winter evenings in a West Coast paddock slightly left of the middle of nowhere, Tony Bromley and Sally Gray are giving their all in the name of science.

It’s very cold, more wet than not, and the air so thick with sandflies they get stuck in your eyelashes.

At the beginning of June, Tony and Sally were working out of a tent, but the wind got so strong bits of it blew off down the road. So now they’ve rigged up a tarpaulin off the back of their Land Cruiser. When it’s raining, which it almost always is, they have to shake the water out of the top of it to stop it collapsing.

Meanwhile, somewhere over the Southern Alps, a sleek, sophisticated Gulf Stream jet fitted with racks of highly specialised instruments is flying with six scientists aboard. It chases gravity waves and will spend between six and 12 hours in the air as the scientists monitor the instruments and sensors that are measuring quantities such as wind gusts, vertical velocities, pressures, and temperatures -  data that, ultimately, will lead to more accurate weather forecasting.

Back at Christchurch Airport, in a cavernous warehouse far, far away from Duty Free, is Operation Deepwave HQ. Here, dozens more scientists are glued to laptops in windowless rooms watching the data coming in from the Gulf Stream. Then they analyse, plot, plan and debate the best time and route for the next flight and seek expert input from around the globe.

Deepwave (Deep Propagating Gravity Wave Experiment) is the biggest scientific experiment to be carried out in New Zealand for at least 20 years. It started in early June and will finish in late July. Led by National Center for Atmospheric Research in the US and the German Aerospace Centre and funded by the US National Science Foundation, it involves scientists from universities and research centres in five countries and has been years in the planning.

Gravity waves, which form when strong winds strike a large obstacle such as a mountain range, have not been well studied. They are difficult to see at high altitudes and need special equipment to track and analyse. But climate scientists consider them extremely important because they carry and transfer momentum and energy in the atmosphere and so affect the weather and climate.

It is helpful to think of gravity waves as similar to ocean waves. They certainly behave similarly, breaking at a certain point high in the atmosphere where their momentum and energy is dispersed.

In the Southern Alps in winter, the strong south polar jet stream hits the mountains, triggering gravity waves. That makes New Zealand an ideal site for this experiment.

In the paddock at Hannah’s Clearing, about 20km south of Haast, Tony and Sally start work about 5pm, about an hour before the Gulfstream takes off.

Despite the total absence of facilities, it is a place that is very useful for data collection.

“We’re right on the western side of some of the highest peaks and biggest ranges and this was a place it was decided would make a very useful contribution to the project,” says Tony.

For 10 to 12 frantic hours they prepare weather balloons for release, tracking them as they ascend, feeding the data to Christchurch and starting all over again three or four times through the night until the jet returns.

The balloons, made of specially- treated neoprene, are filled with helium and a radiosonde – a small, white box capable of taking tens of  thousands of intricate measurements – tied to it. Once released, the balloons ascend at about 300m a minute, disappearing almost instantly into the night sky.

But every second the radiosonde transmits information that appears on a laptop as a series of coloured lines on a graph that Sally, perched on a box in the back of the van, watches intently.

“It’s really interesting to see what happens over the course of the night,” says Sally. “Even though we’re looking at one flight now, when we do the next one in three hours there will be changes we haven’t noticed before.

“We’ll get some squiggles and wonder what caused it then we’ll sit down and try to work it out.”

At Hokitika Airport and at NIWA’s atmospheric research station at Lauder in Central Otago, other teams of scientists are doing exactly the same thing at exactly the same time. But Tony is proud his balloons seem to be going higher than the others.

The balloons eventually burst and disintegrate and most likely the radiosondes fall into the sea.

All this is taking place in the dead of night because the project is focused on measuring gravity waves at extremely high altitudes. To do that, some of the instruments on board the jet must operate without sunlight.

One of these is the Lidar (a laser radar) which uses laser technology and remote sensing capabilities to measure the wave structure as high as 100km from the ground.

But to ensure the whole team makes the most of the time they are together in New Zealand, they need to know the best time to fly.

That’s where NIWA meteorologist Richard Turner comes in.  From a bunker at Christchurch Airport – acting as Deepwave HQ,  he leads a forecasting team providing an overview of how the waves are being generated, and what’s generating them.

For Richard it’s a rare opportunity to spend time with international colleagues on one project.

“It’s certainly made for a change of pace. It’s been very exciting living and breathing the science of gravity waves for an extended period, and we’ve learnt quite a bit as we go.”

In the team of about 100 people, are several graduate students from Yale University which  is very enthusiastic and putting a lot of effort in as well.

“In the first instance we are very interested in how our model predictions stack up against the data and how well we’ve done in terms of predicting the conditions.

“Ultimately this will lead to improved understanding of the role of gravity waves in distributing momentum and energy in the atmosphere which should lead to more accurate forecast models.”

Back at Hannah’s Clearing, the data from the latest balloon flight has been downloaded and sent to Deepwave HQ in Christchurch. The generator is humming away in the paddock, Tony and Sally have had a quick cup of tea, and they’re starting the process all over again.

“I’ll go out in the field any day,” says Sally. “It’s definitely an experience.”

View more amazing photos and video from this project on Exposure.co 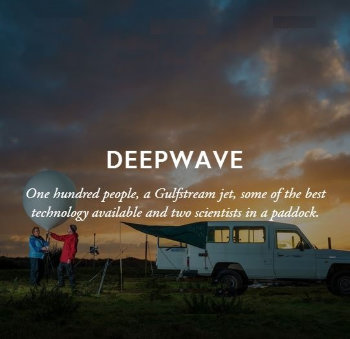 NIWA's Sally Gray (left) and Tony Bromley prepare to release a weather balloon, the attached Radiosonde transmits a range of atmospheric data back to their receiver in Haast. The balloon will reach an altitude greater than 30km and coincide with overnight DEEPWAVE research flights from Christchurch. [Dave Allen] NIWA's Tony Bromley and Sally Gray (right) and  prepare to release a weather balloon, the attached Radiosonde transmits a range of atmospheric data back to their receiver in Haast. The balloon will reach an altitude greater than 30km and coincide with overnight DEEPWAVE research flights from Christchurch. [Dave Allen]