Chasing Giants: On the Trail of the Giant Squid

The giant squid (Architeuthis), the world’s largest invertebrate, has never been seen alive – until now. A new Discovery Channel special joins an international expedition team in the waters off New Zealand as they succeed in capturing living juvenile specimens for the first time. The juveniles were found in the larval stage, ranging in size from 9 to 13 millimetres. The expedition, fully funded by the Discovery Channel, was undertaken in cooperation with NIWA and led by marine biologist Dr Steve O’Shea.

Marine biologists finally catch the giant squid – in the fragile larval stage – in Discovery Channel’s “Chasing Giants: On the Trail of the Giant Squid”

World premiere (airing in US on March 11 from 9 to 10pm), has exclusive footage of science history in the making

Chasing Giants: On the Trail of the Giant Squid has its world premiere in the US on Monday, 11 March, and is due to air in New Zealand at 8.30pm on 17 May. The program follows the hunt for living giant squid – which remain surprisingly elusive despite their adult size of more than 12 metres (40 feet). Before O’Shea’s expedition, no giant squid had ever been seen alive. All of our knowledge of the creatures comes from legend (the Vikings thought they were sea monsters) and dead specimens brought up in fishing nets or washed up on shore. Giant squid exist in all of the world’s oceans, with the largest concentration thought to be in the southern hemisphere near New Zealand.

O’Shea, a leading expert on the giant squid and a researcher at NIWA, studied more than 60 corpses of adult giant squid before determining that the odds of success for finding a giant squid and keeping it alive would be highest by searching for tiny Architeuthis larvae, which he hypothesized would be found in large numbers in their spawning grounds. The challenge was determining where those grounds might be. In the program, O’Shea leads two separate excursions – one off the South Island west coast in the winter of 2000, and another off the island’s east coast in the summer of 2001, searching for the juvenile squid.

Chasing Giants: On The Trail Of The Giant Squid joins O’Shea and his scientific colleagues on their search, where they explain why the squid is a compelling catch and how they can distinguish its larvae from those of other squid species – a difficult, microscopic task of identifying a series of visual markers, pioneered by O’Shea. Frequent close-ups under the electron microscope let viewers get in on the scientific action. Other squid species merit attention along the way: the program features footage of a live histioteuthis, a magnificent violet squid. Night-time hauls turn up a host of deep-sea creatures rarely seen alive, and for the first time ever, the team keeps deep-sea squid alive in a special aquaculture facility for more than 30 days. This major achievement allows the team to learn more about how to preserve these delicate deep water creatures alive out of their natural environment.

Early disappointments in catching living giant squid specimens during the winter excursion teach the scientists one reason why their fragile juveniles are dying: crustacean spines, also in the nets, are puncturing their fragile skins. Larva skin just one cell thick means the slightest tear can expose it to infection or death. O’Shea and his crew switch to an extra-gentle, fine-meshed net. For his second foray in the spring of 2001, he is joined by world renowned squid experts Professors Malcolm Clarke and Chung Cheng Lu. Together, they try an ambitious hundred tows in 12 days – netting perfect and photogenic samples of healthy deep-sea squid. They determine that the best specimens might not be in deep water where the adults live, but in warmer surface water. Finally, sifting through their catch, they identify Architeuthis larvae that died.

With time running out, the team succeeds. Discovery’s cameras capture the first-ever look at living giant squid in the larval form, swimming robustly under the microscope lens. The expedition heads for port with an unprecedented catch of seven live giant squid. Aquaculturist Mike Tait simulates their home habitat as closely as possible to minimize stress, but the babies are too vulnerable to make it. O’Shea closes the expedition determined to try again, this time armed with new knowledge about keeping the larvae alive – and, he hopes, raising them to giant-sized adulthood. 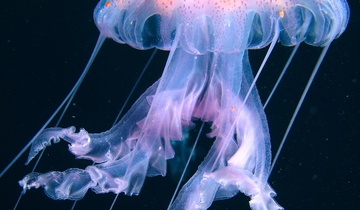 Chasing Giants: On the Trail of the Giant Squid