The Louisville Seamount Chain VME Voyage is now completed and we are on the long steam home, made challenging due to the weather. What happened to those sunny calm days we experienced on most of the voyage?

Last night we ran into 45 knots of wind pushing 10 m swells. Currently the swells are down to 7-8 m as we pass through the 'eye of the storm' and press onwards to the winds on the other side that have been hitting New Zealand. Fingers crossed we will arrive in Wellington on time on the 6th, 'shaken not stirred'.

What have we achieved?

The seafloor environments of six large seamounts, have been mapped and detailed bathymetry plots produced along with a new 3-D image of the Seamount chain. We have completed 157 sampling stations – 119 DTIS tows, 25 epibenthic sleds, 6 CTD rosette casts, and 7 SVP deployments (required for the accuracy of the swathing work). A total of 637 specimen lots were preserved and catalogued, and 119 hours of video footage and over 27000 high resolution still images of the seafloor means there will be a lot of image processing ahead. Several live specimens of stony branching corals are being held in the on board cold-water aquarium and the geneticists have their coral, sponge, and associated species tissue samples stowed in the -80°C freezer. Among the species we observed or sampled, some of which may be new to science, were an intriguing luminous bamboo coral that we photographed, a new urchin that crawled out of a dense clump of coral matrix, and two schools of orange roughy and black cardinalfish. We have extended our knowledge of the spatial distributions of several invertebrate groups from the New Zealand region.

While we have located some areas of extensive deep-sea coral habitat, overall, distribution of the VME taxa was patchy. Excellent data however, have been collected to evaluate the reliability of models that predict suitable habitat for these organisms and also help develop improved models. All the data will feed into international scientific studies and discussions investigating deep-sea ecosystems, and the nature and extent of vulnerable habitats.

It is not all over yet though! There are numerous data backups required, data summaries, a voyage report to write with input from several of the scientific staff on board, and the inevitable cleaning and packing up process is underway. In the midst of the lab cleaning, time for a "Team Photo" on the deck.

Thanks from the scientific team on board Tangaroa!

We filmed some of the rough seas on our return journey.  Check out the video below, filmed from the bridge of the Tangaroa. 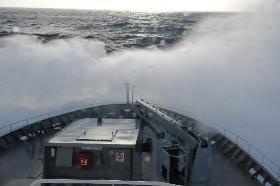 Waves crashing over the bow of the Tangaroa. [Deb Glasgow] 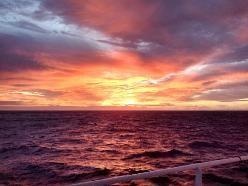 A fond memory of a stunning sunrise on the Louisville. [John Guinotte] Our port to port voyage track and location of the seamounts along the Louisville Ridge is shown in the figure above. [Arne Pallentin]

Team photo - the scientific team on board the Tangaroa. [Deb Glasgow]