The Canterbury earthquake: modelling damage and human displacement in Christchurch

Information gathered from the September 2010 Canterbury earthquake may help prepare communities for future natural disasters. NIWA and GNS Science are using data on damage and human displacement caused by the quake to help validate RiskScape, a natural hazard impact and risk-assessment tool.

Damage to buildings is probably the most obvious and dramatic consequence of an earthquake in an urban area. Pictures of Christchurch’s damaged buildings and their demolition dominated the media following the September 4th earthquake. Many people either temporarily or permanently lost their homes, had to live without basic amenities, or suffered building and contents damage of varying degrees. Others lost their workplace and their livelihoods, at least in the short term.

The RiskScape model is being developed to predict and quantify such consequences of natural disasters. It will help authorities prepare for natural hazards, and enable them to respond quickly if a disaster strikes.

RiskScape contains highly detailed data for a number of places in New Zealand, including Christchurch. Scientists have compiled data on the number, age, and type of buildings, their size and condition, materials used in their construction, value of contents, and much more. They have also gathered data on what the buildings are used for – homes, offices, schools, shops, factories and so on, and the number of people likely to be in them at any particular day and time.

When the details of a real or projected hazard are combined with building, infrastructure, and social information, RiskScape simulates the impact of the disaster on the buildings, and predicts the consequences in both human and economic terms.

Some of the outcomes of the earthquake in Christchurch City predicted by RiskScape: Screenshot from RiskScape showing the predicted location of buildings and different levels of damage in Christchurch City (click on image for full-size version).

The model also estimated some of the economic costs of the damage, including a $2.4 billion cost for repair to damaged buildings alone. Note that these figures are for Christchurch City only, and do not include the wider Canterbury region affected by the earthquake.

RiskScape is still under development, so data from the Canterbury earthquake will be extremely useful for validating some of the model’s assumptions.

For example, scientists will be able to see how well the model predicted:

•  which buildings would be damaged and how badly
•  the financial costs of the damage (using data from insurers)
•  the numbers of displaced people, and the length of time before they were able to return home. 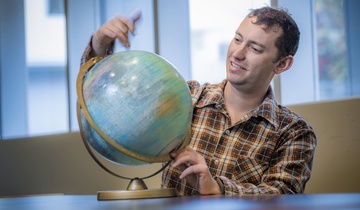 The Canterbury earthquake: modelling damage and human displacement in Christchurch