Cam-Era consists of a number of remote sites around the coast of New Zealand connected via the internet to NIWA’s servers.

Each site has a computer to control the system and an internet connection so that it can communicate with the NIWA servers. Some sites have the remote computer housed some distance away from the camera, with a radio link connecting the two.

The basic hardware of the Cam-Era system comprises a colour video camera, either an analog CCTV or an IP camera with a fixed focal length lens. The lens size is variable depending on the site.

At each site the camera is controlled and data processed by a PC running Microsoft Windows. Analog CCTV systems utilise an Integral Technologies Flashpoint 128 video frame-grabber board while IP cameras do not require a video frame grabber.

Both systems allow full-speed video to be viewed on the computer screen as well as frame grabbing/storage at rates up to four per second. All operations (frame-grabbing, image analysis, transfer of files to our web server) are controlled by a scheduling program and NIWA supplied code. This software allows us to control all operations using simple text scripts. All site computers are accessible by remote control software which allows maintenance via the internet from anywhere.

We have installed remote wireless links at some sites. These wireless links operate at 2.4 GHz, sending the video signal via radio from the camera sites to a receiving station up to 5 kilometres away. Each receiver can handle signals from four camera/transmitters, and the computer controls which channel is viewed. This technology means that we do not have to physically connect the camera to power or phone lines. In these instances the camera and link are powered by batteries which are charged via solar panels.

The site computers are linked to NIWA Servers via the internet with a variety of options available, some use standard wired ADSL while others are connected to the internet via cellular devices. All images are transmitted to NIWA servers via NIWA’s FTP server with all images being archived for future use.

Each site computer and its software are easily maintained using remote control software from anywhere there is internet access. For example, changes can be made to the sampling frequency, and special video capture sequences can be initiated (i.e., for special tides or rectification purposes). Our file transfer protocols have been set up so that, if for any reason the remote computers are unable to connect to the Internet or transfer the files, they are sent at the next available connection time. Problems do occur from time to time with this technology (e.g. disruption of local Internet connection, equipment failure). Generally, these occur irregularly and the site computers are programmed to continue working; they catch up on file transfer once a connection is re-established. We are advised immediately if a file transfer does not occur, allowing us to investigate problems promptly. Each day a status email is sent from each site computer to keep NIWA staff informed of any issues. 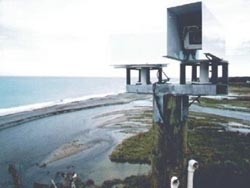 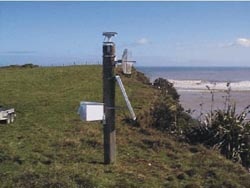