Many of our iconic native fish species, such as whitebait and eels, rely on river flows to cue key life-cycle stages, including migration and reproduction. As pressures on water resources increase, the risk of disrupting these flow cues, and therefore impacting fish populations, becomes greater.

A number of our galaxiid fish species, including whitebait, have developed a unique relationship with flow for reproduction. These fish lay their eggs in bankside vegetation during elevated water levels. As the water levels recede, the eggs are left to develop out of the water amidst the vegetation. The eggs take about three to four weeks to develop, but are then reliant on being inundated again to hatch and make their way out to sea.

This reliance on flow variability for successful reproduction makes some of our iconic galaxiid fish species highly susceptible to changes in the magnitude, timing and frequency of elevated flows that can be associated with water resource use. However, detailed knowledge of the spawning behaviour of even our most common galaxiid species is severely lacking. Consequently, at present there is no guidance on how these instream flow needs should be integrated into the water resource management process.

We have undertaken a study of spawning behaviour in the largest of our galaxiid fish species, the giant kokopu (Galaxias argenteus) (Figure 1), in a stream located in Hamilton. The objective was to identify their spawning habitat and begin to characterise the flows required for successful spawning and reproduction. We successfully discovered the spawning sites of giant kokopu for the first time in autumn 2013, with further nest sites identified alongside the stream margins in subsequent years (2014-16). Eggs were discovered in bankside vegetation at around 0.6 m above base flow water levels. In the study stream, spawning has occurred as early as April and as late as July, with timing appearing to vary in response to both the availability of suitable flows to inundate the spawning sites and water temperature (Figure 2 and 3). 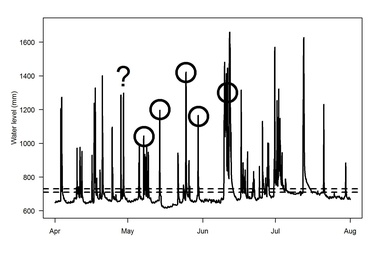 The consistency in the elevation of spawning sites above base flow water levels suggests that the fish are cuing in to flows of a particular magnitude for spawning. However, our observations indicate that all flows that inundate the spawning sites during the spawning season are not used for spawning, with a preference for larger flows. We hypothesise that this may be related to the duration for which the spawning sites are inundated, giving enough time for the fish to spawn, and/or the depth of inundation, with the fish requiring a minimum depth of water where they wish to lay their eggs.

Our observations indicate that egg development takes around 25 days under ambient conditions (mean air temperature around 9-10 °C) (Figure 4). At this stage, eggs are mature and ready to hatch upon re-inundation by elevated flows. However, in 2013 there was an extended dry period after the eggs were laid and flows high enough to inundate the spawning sites and initiate hatching did not occur for several months post-spawning. This resulted in all eggs dying. While unfortunate for the fish, this natural experiment highlights the susceptibility of this critical life stage to changes in flow regime. It also allowed us to observe that many eggs remained viable for up to around seven weeks post-spawning and some to eight or even nine weeks. This tells us that elevated flows that re-inundate the spawning sites and allow hatching are required in the period from three to seven weeks after eggs have been laid, with the optimum likely being around four weeks. 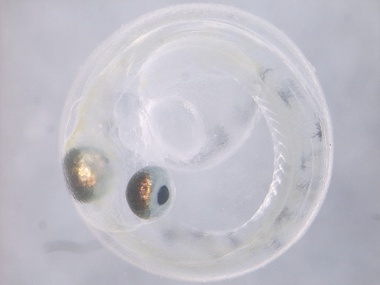 Figure 4: A close-up of a giant kokopu egg at 25 days old clearly showing the fish larvae inside the egg. [Rimu Wharakura]

These results provide an initial indication of the characteristics of the flow regime that are important for supporting reproduction in our galaxiid fish species. In the future we plan to extend this work to further sites and some of the other main galaxiid species, e.g. banded kokopu (Galaxias fasciatus), in order to try and understand how generally applicable these observations are and therefore how they can be translated in to water quantity rules.