The Salmonidae family is native to the Northern Hemisphere, but several species have been introduced to New Zealand. Some of these species, particularly brown and rainbow trout, have established very successfully here and support New Zealand’s reputation as an angling Eldorado. Salmonid fisheries in New Zealand are administered and managed by regionally based fish and game councils, who set bag and size limits, regulate the angling methods allowed and the length of the fishing season, and in a few instances, raise fish in hatcheries for release into the wild.

Spawning in salmonids always takes place in fresh water, and the eggs are deposited in an excavated nest on the substrate called a redd. Redds are dug by the female fish and can cover an extensive area of the bed – the average size of brown trout redds is almost 2 m2. Sockeye and chinook salmon die after spawning whereas Atlantic salmon, trout and char can spawn several times. The salmonid species found in New Zealand are: 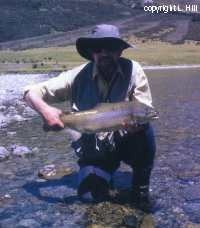 Juvenile salmonids are difficult for amateurs to tell apart and are best identified by an expert. The colour pattern of larger fish can vary considerably depending on habitat, age, and life stage. Sea-run fish tend to be uniformly silver whereas river-dwelling fish have a more spotted pattern that makes them difficult to see against the substrate.

Spawning adults can assume distinct and bright colours. In some salmonid species, spawning males develop an upturned hook on their lower jaw. This is known as a kype.

Brown and rainbow trout and brook char are widespread throughout New Zealand, although brook char occur at higher altitudes and are much less common than the trout species. Mackinaw and Atlantic and sockeye salmon are totally restricted to the South Island. In their native countries, the salmonids support valued commercial as well as recreational fisheries. Trout farming is illegal in New Zealand, but a few salmon farms are in operation in the South Island. There is no significant commercial fishery of wild stocks, and the recreational fisheries are largely confined to fresh water.