Compared to other countries, New Zealand has a sparse freshwater fish fauna of just over fifty species. But it is unique and comprises at least thirty-five native species of which thirty-one are found only in New Zealand. Most of the native species belong to just four families of fish, and include twenty galaxiids, seven bullies, two eels, and two smelts. Nine potentially new galaxiid species have been recently found in Otago but are yet to be named so the list is not yet complete.

Because of the sparse native fish fauna, a large number of species have been introduced (legally, illegally and accidently). Of the fifteen species that are known to have established breeding populations in more than one location, six are salmonids (Salmonidae), four are cyprinids (cyprinidae), and three are live-bearers (Poecillidae). The redfin perch and the bullhead catfish are also well established. A further two species (grass and silver carp) are present, but do not breed. Five other species have very restricted populations and their current status is uncertain.

An unusually high proportion of the native fish are diadromous (i.e. they all have a marine phase in their lifecycle). Although several grow to adulthood in freshwater then migrate downriver to breed in the sea (e.g., eels, mullet, freshwater flounder), most breed in freshwater with their juveniles travelling downriver to develop at sea (e.g., galaxiids, smelt and bullies). Only the lamprey breeds and develops in freshwater streams and spends its entire adult life at sea.

Because these diadromous species all need to migrate upriver from the sea at some stage, they are vulnerable to barriers created by falls, chutes, dams, weirs, and culverts. They also vary widely in their ability to move upriver. Some species (eels and certain galaxiids) can climb vertical wet rock faces and they penetrate far upriver to high altitudes. Others cannot climb and are restricted to lowland, coastal streams. As a consequence, the geographical distributions of the species vary widely within rivers and are greatly affected by both altitude and distance from the sea.

Many of the native species are small, cryptic and/or are nocturnal so it is not surprising that most people are not aware that they are present. They express surprise when they learn that there is more to the native fauna than just eels and galaxiids. For example, redfin bullies are brightly coloured and good in aquaria, whereas torrent fish are shaped like a stealth fighter and are well adapted to cope with the high water velocities found in rapids where they live.

Many of the largest native galaxiids (called kokopu) live mostly in small streams running beneath forest or bush canopies. Widespread conversion of forest to pasture has resulted in their decline, and the introduction of predatory trout restricts their distributions within forested streams. As a consequence of these changes, together with the creation of migration barriers and loss of habitats, a number of the native fish are now endangered. A 2010 report indicated that whereas only the grayling is extinct, eight species are nationally threatened and another twelve are now in decline.

Eels and galaxiids are responsible for commercial and cultural fisheries in New Zealand rivers with five species of galaxiids comprising the national delicacy known as 'whitebait'. Sports fisheries are based on introduced species, including chinook salmon (South Island rivers), rainbow and brown trout (lakes and rivers nationally), and coarse fish (perch, rudd, tench, koi carp), mainly in small North Island lakes. Other introduced species (i.e., gambusia, catfish, goldfish) have few if any values and some of the introduced species are pests in some places because they either reduce native biodiversity, degrade other species habitats, or contribute to the decline of water quality in lakes. 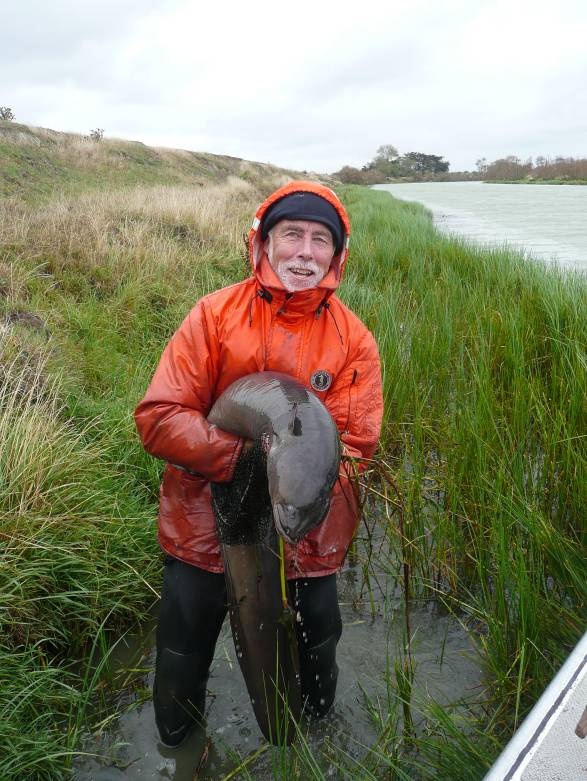 While it is small and cryptic, the colour of the redfin bully makes it a favourite with aquarists (Credit: Stephen Moore)