Help us build a better niwa.co.nz for you by filling out our annual survey
17 May 2012

Fine sediment loads delivered to estuaries by rivers are higher today than prior to catchment deforestation due to increased soil erosion. The effects on water clarity, which then impact sensitive estuarine ecosystems, are significant.

Much of this fine sediment is delivered during flood events, by buoyant plumes of freshwater and silt (see figure 1). Fine sediment particles discharged by rivers are trapped in the upper reaches of estuaries due to flocculation (where particles clump together in a floc) and landward-directed bottom currents driven by density differences between freshwater inflows and saline estuarine waters. This mud-trapping results in the so called 'turbidity maximum' phenomenon where estuarine waters tend to be more 'muddy' than their inflowing rivers.

The increased "muddiness" of estuarine waters reduces water clarity and has a number of adverse effects on estuarine and coastal ecosystems. These include limiting the feeding options of predators like snapper and seabirds that rely on their eyesight to find food. Reduced light penetration also adversely impacts the growth of submerged aquatic plants such as seagrasses (see figures 2 and 3). The extent of seagrass habitat has substantially declined in many New Zealand estuaries in recent decades - particularly sub-tidal seagrass meadows - most likely as a result of reduced water clarity.

Interestingly, the relationship between CDOM and salinity is similar for all three rivers discharging to the Kaipara Harbour) that we surveyed (Kaipara, Hoteo and Wairoa). The relationship is also strongly linear over most of the salinity range, although in the Hoteo River the CDOM content is higher below ~ 5 psu. These data indicate that CDOM discharged to estuaries by rivers behaves reasonably conservatively with its value depending on mixing/dilution with seawater.

These initial results suggest that CDOM in estuaries can be estimated based on measurements and modelling of water salinity over a range of temporal and spatial scales. The next step in this research project is to deploy multi-parameter instrumented platforms in the Kaipara Harbour, in conjunction with the Auckland Council and Northland Regional Council, to acquire long time-series of data over a wide range of conditions (e.g., low–high river flows, sea state etc.) (see figure 5). This data will help to develop a comprehensive understanding of processes driving visual clarity and light penetration in estuarine waters. Figure 1: A plume of fine suspended sediment is discharged to the Kaipara Harbour by the Hoteo River, March 2011 (M. Pritchard, NIWA). Figure 2: The visual clarity of estuarine waters is reduced by both fine suspended sediment particles and coloured dissolved organic matter. These substances scatter and absorb sunlight so that the amount of light available reduces with depth below the water surface. Figure 3: Reduced light penetration in estuarine waters has reduced the availability of habitat suitable for seagrass growth, particularly in the subtidal zone where the seabed is continuously submerged. 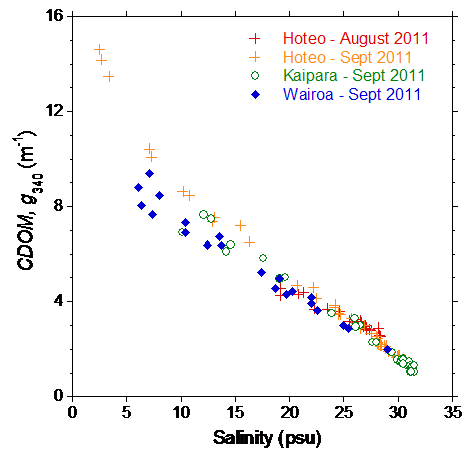