The main breeding population of New Zealand sea lions at the Auckland Islands has halved in size since the late-1990s; NIWA scientists are working with the government and experts from around New Zealand and overseas to understand why.

New Zealand sea lions used to breed all the way around New Zealand but were extirpated from the mainland by the first settlers and the remaining sub-Antarctic populations were further depleted by commercial sealing at Sub-Antarctic Islands in the 19th century. Their numbers slowly recovered but then, more recently, the main breeding population at the Auckland Islands went into free-fall, declining by half since the late-1990s. This decline led to the reclassification of the species as Endangered by the International Union for Conservation of Nature in 2015. The causes of this decline are uncertain.

A tiny group of New Zealand sea lions on the Otago Peninsula is helping scientists understand why some populations are doing better than others. The Otago Peninsula population, made up of a small number of females who together produce less than than 15 pups a year, has been growing while the population in the Auckland Islands has declined.

At Otago, the reproductive rates are higher than at the Auckland Islands, females produce pups at a younger age and far fewer of these pups die in the first year of life.

Sea lions are tagged for mark-recapture research using numbered cattle tags [Jim Roberts, NIWA]
NIWA scientists have been studying the survival, reproductive rate, diet and other biological factors of different colonies to come up with answers.

With several hundred sea lion teeth as historical libraries, scientists have been using isotope analysis to understand what sea lions ate, where they ate it, and if there were changes in ocean conditions over their lifetime.

They’ve also been developing statistical models using ‘mark-recapture’ data from sea lions which have had plastic cattle tags attached to their flippers shortly after birth. By measuring which sea lions return to breeding rookeries, scientists can understand how survival, reproductive rates and age at first pupping change over time.

At the Auckland Islands, the population’s decline cannot be explained by a single cause. The most pessimistic view of mortality caused by captures in fishing trawls can only explain a fraction of the decline and it’s clear that something much larger is affecting the sea lions. Low pup survival and the observations of field scientists during the breeding season point to food limitation and bacterial disease as strong candidate causes for the decline.

The bacterium Klebsiella pneumoniae is known to be a major cause of pup deaths in the Auckland Islands, and may have killed hundreds of pups a year. It’s possible that a vaccine can be developed, but such an intervention would be costly and scientists need to know more about the how the disease spreads and how much of the low pup survival can be explained by disease. Also, more work is also needed to identify the key prey species sea lions need to be productive. MPI and DOC are also working on an New Zealand sea lion Threat Management Plan which will provide recommendations for addressing key threats. NIWA’s work on a risk assessment model is integral to this.

The New Zealand sea lion Threat Management Plan is due to be finished in 2016. 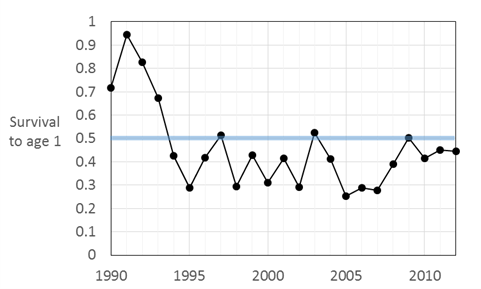 Roberts J. (2015). Review of threats to the recovery of NZ sea lions and other otariid species. Report prepared for the Department of Conservation & Ministry for Primary Industries.

Key research on New Zealand sea lions by other researchers