A new scientific assessment of Hector’s and Māui dolphins has led to a revised understanding of their biology, their  distribution and their main threats.

NIWA marine scientist Dr Jim Roberts has been leading an assessment team from NIWA, Massey University and Quantifish that is using new data and methods to assess the threats to New Zealand’s own dolphin species.

Māui dolphins are found off the west coast of the North Island. They number just over 60 and are a closely-related sub-species of Hector’s dolphins, of which there are about 15,000 dolphins. The South Island Hector’s dolphins are most abundant in the cloudy waters produced by sediments from the major glacial rivers. The 18-month scientific study has discovered:

The experts undertaking the risk assessment used data obtained from aerial surveys of the dolphins’ locations and then related it to the turbidity of waters around New Zealand, determined from high resolution satellite data.

“There was a very neat relationship,” Dr Roberts says. “And we also know that red cod and small inshore fish  – their main food source  and sevengill sharks – the main predator – prefer turbid water as well.”

Being able to determine where the Hector’s and Māui dolphins go allows scientists to predict much more accurately where commercial fishery deaths could occur and the risk that these pose to dolphin populations around New Zealand.

Toxoplasmosis main non-fishery cause of death

Unfortunately, the dolphins’ preference for coastal turbid waters has brought them into contact with other human threats, including toxoplasmosis – a disease caused by a hardy microscopic parasite that is spread by cats and carried in streams and rivers to the ocean, Dr Roberts says.

Toxoplasmosis has been found to be the main non-fishery cause of death, having killed nine out of 55 post-weaning age Hector’s and Māui dolphins for which carcasses were recovered since 2007. Other causes of death in dolphins washing up on beaches include bacterial and fungal infections as well as fishery bycatch and predation.

Worryingly, Māui dolphins were estimated to be most exposed to the toxoplasmosis parasite of all the sub-populations. This is because of their close proximity to the Waikato River, which has a large and quite densely-populated catchment.

“We still know very little about the spread of this hardy parasite around New Zealand, though Professor Wendi Roe and colleagues at Massey University has also found that it has killed New Zealand native birds including kaka, kererū and kiwi and is also a major conservation threat for Hawaii’s endemic species, including endangered Hawaiian monk seals.”

Dr Roberts says the new assessment has significantly altered our understanding of the relative risk to Hector’s and Māui dolphins from commercial fisheries.

“Commercial fishery deaths are estimated using data collected by government fisheries observers, and those estimates are more precise than for non-fishery deaths. But if carcasses that wash up on our shoreline are representative of the cause of death in the wider population, the numbers of dolphins dying from toxoplasmosis are likely to be much greater than commercial fishery deaths. They may add up to hundreds each year for both the East and West Coast dolphin populations.”

“However, we are only recovering a small percentage of the animals we think are dying each year, and we will be able to learn much more if we can increase the rate at which carcases are found and reported,” Dr Roberts says.

The assessment was a hugely collaborative effort, with contributions from New Zealand scientists, stakeholders and international experts, and was stringently reviewed throughout this process.

“This new study has completely revised our scientific understanding of the threats to these animals,” Dr Roberts says.

The New Zealand government is using this new information to develop an updated Threat Management Plan for Hector’s and Māui dolphins that will set out the management response to protect the species from the mix of human threats.

The plan, which will be released for public consultation next month, will also prioritise the science required to better understand the changing mix of threats.

“Future research can give us the information we need to improve our assessment of other human threats, including recreational fishing and climate change. Māui dolphins occupy the northern end of the species’ range where the fish they like to eat appear to be less abundant. This means they may be particularly susceptible to the warming of our coastal waters” Dr Roberts says. 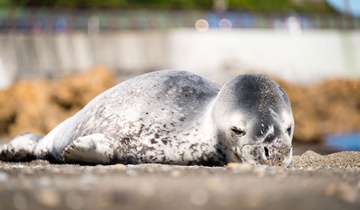 They were defrosting leopard seal poo...you won't believe what happened next!