A collaboration between researchers from Victoria University and NIWA has revealed the bioactive health potential of a marine bryozoan extracted from Tongan waters.

Following a marine natural products group university trip to Tonga in 2016, expedition members collected a variety of sponges and one bryozoan. After taking a closer look at the Tongan bryozoan’s chemistry, Victoria University of Wellington PhD student Joe Bracegirdle recently discovered two molecules that hadn’t previously been reported. He was surprised to find they showed strong kinase inhibitory activity.

Kinases are enzymes that play an important role in cell function. They’re useful in sorts of potential health applications – having even been shown to reduce progression of Alzheimer's disease in mice. A solvent-based technique was used to extract the molecules, that were later purified. NIWA emeritus researcher Dennis Gordon identified the bryozoan using a scanning electron microscope to uncover its taxonomy. It is known as Nelliella nelliiformis.

Also known as moss animals or sea mats, bryozoans are a beautiful and diverse group adapted to live in many marine habitats. They acquire toxic metabolites as a way of chemically defending themselves. It’s these which have captured the interest of researchers as a potential source of bioactive natural products. Naturally occurring biological compounds, especially from plants, have been used as medicines for thousands of years. But bryozoans haven’t been as well-studied as other kinds of marine organisms.

“It’s a years-long process to go from the research and development stage to commercialising new natural bioactive products. Possible applications for the Tongan bryozoan are still being investigated. Our lab is the first step of discovery. We're finding the new molecules that can be put to medicinal chemists to develop as pharmaceutical drugs.”

For now, the collaborative efforts of the research team – Joe Bracegirdle, Dennis Gordon and Victoria University organic chemists Joanne Harvey and Robert Keyzers - have proven promising enough that they’ve applied for a patent. Their work has featured in the Journal of Natural Products. 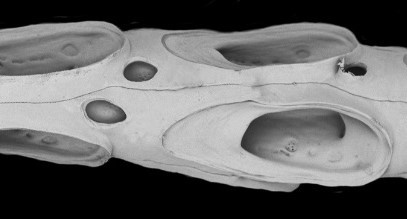 Skeleton of a jointed stem of a bryozoan. [Photo: Dennis Gordon]