The tropical Pacific remained in an ENSO (El Niño – Southern Oscillation) neutral state (neither El Niño nor La Niña) during June 2017, but oceanic and atmospheric anomalies were mixed, with some indicators leaning towards El Niño and others towards La Niña. Across the equatorial Pacific Ocean, sea surface temperatures (SSTs) are currently slightly above normal. The large-scale atmospheric circulation continues to generally reflect ENSO-neutral conditions, but is showing conflicting signals: the Southern Oscillation Index (SOI) is currently negative (i.e. leaning towards El Niño), with a value of -1.0 for June 2017, but large-scale rainfall and convection anomalies are showing La Niña-like patterns, with more intense than normal convection and rainfall over large parts of the Maritime Continent.

International guidance – in contrast to previous months – now suggests that the tropical Pacific Ocean is more likely to remain in an ENSO neutral state (60% chance) than to transition towards El Niño (35% chance) over the next three month period (July – September 2017). The probability for El Niño increases only slightly later during the year, with a maximum of 43% over the October-December 2017 period. Chances for La Niña development remain low (less than 15%).

Coastal waters remain generally warmer than average all around the country, with anomalies exceeding +0.5oC along the west coast of the South Island. However, in the last two weeks, SSTs have trended slightly cooler near the North Island. The anomaly in the “NZ box” (160°E-170°W, 30-45°S) is currently reaching about +0.5oC. Ocean waters are still much warmer than average in the southern part of the Tasman Sea, off the east coast of Tasmania and southeast Australia, with anomalies exceeding +3oC in place.

The dynamical models’ forecasts indicate that warmer than average SSTs around New Zealand are likely to persist or intensify over the July – September 2017 period. 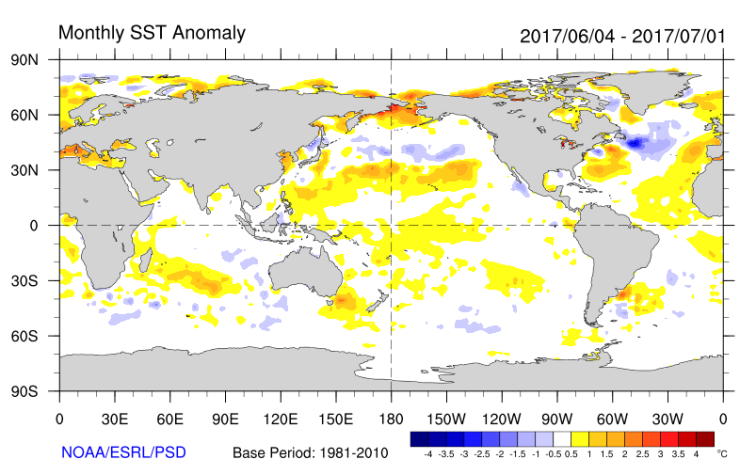