New Zealand climate in May

More frequent northwesterlies than usual were recorded over much of New Zealand in May. It was the warmest May in over 140 years of measurement, with a national average temperature of 1.7 °C above normal. Rainfall was well below normal in the north and east of the country, and well above normal in Nelson. The month was sunnier than usual in many North Island and eastern South Island locations.

For more information on the climate in May 2007, visit the climate summaries page at www.niwascience.co.nz/ncc/cs/mclimsum_07_05

March to may: the climate we predicted and what happened 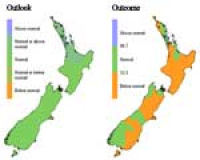 Rainfall was mostly lower than predicted, apart from areas, of Northland, Waikato, and the north and east of the South Island, which recorded normal rainfall. 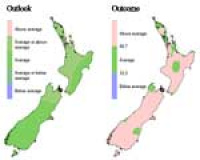 Air temperatures were correctly predicted in the north and west of the North Island, and the north of the South Island. In most other places, autumn was warmer than expected. 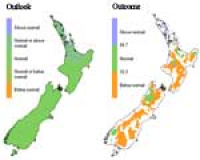 Streamflows were above normal in the far north, as was predicted, but mostly below normal elsewhere.

The three outcome maps give the tercile rankings of the rainfall totals, mean air temperatures, and mean river flows that eventuated from March to May, in comparison with the forecast conditions.