Exceptional conditions in May 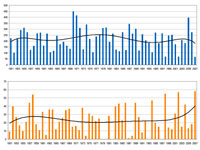 Autumn rainfall (above) and days of soil moisture deficit (below) at Napier Airport. The black smoothed curves are added to aid interpretation of trends in the data. 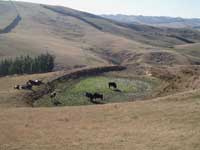 Grazing the water hole. Many east coast small dams were unusually dry in the May drought. (Photo: Richard Hilson)

New Zealand was warmer in May than for the same month at any time in the 140–year instrumental record. Parts of the east coast of both islands recorded record low rainfalls for the month.

Typically, soil moisture levels in Hawke’s Bay improve rapidly in April, as rainfall exceeds evaporation. This year April rainfall made little impression on soil moisture levels in some areas, and severe moisture deficits in Hawke’s Bay continued into May. Historically there are, on average, 3 days of deficit in May, but this year there were 21 days. The ‘Days of Deficit’ figure below shows total days of deficit for the three months of autumn, with 58 days in 2007, compared to an average since 1951 of 24. The data suggest that an autumn deficit of at least 50 mm can be expected about once every 14 years, but as can be seen the last three deficits of that magnitude have occurred since 1997.