Historical daily rainfall records were swept aside in eastern parts of Northland as exceptionally high rainfall rates produced flooding and extensive infrastructure damage at the end of the month. In marked contrast, the rest of the month was summerlike, with a mix of anticyclones and winds from the northerly sector producing warmth and plentiful sunshine, and mainly dry conditions in the east.

For more information on the climate in March 2007, visit the climate summaries page at www.niwascience.co.nz/ncc/cs/mclimsum_07_03

January to March: the climate we predicted and what happened 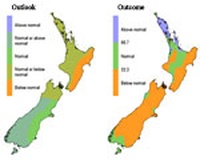 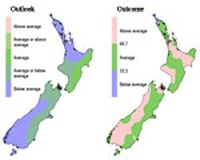 Air temperatures were higher than expected in many parts of the country, although normal as predicted in much of the east of the North Island. 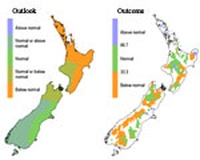 Streamflows were normal or below normal as predicted in the North Island apart from the far north, and the north and east of the South Island. Western South Island flows were lower than predicted.

The three outcome maps give the tercile rankings of the rainfall totals, mean air temperatures, and mean river flows that eventuated from January to March, in comparison with the forecast conditions.