February was unusually dry over much of New Zealand. Ranfurly in North Otago had no measurable rainfall in February, and just 1% of normal rainfall was recorded at Lake Tekapo, making it the driest February there in over 80 years. The exception to the dry conditions was in Northland where three days of heavy rain caused flooding.

For more information on the climate in Februar 2007, visit the climate summaries page at www.niwascience.co.nz/ncc/cs/mclimsum_07_02

December to February: the climate we predicted and what happened 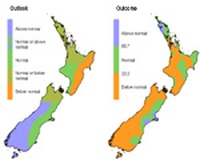 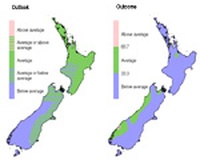 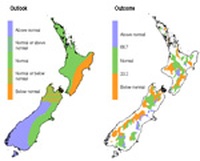 The three outcome maps give the tercile rankings of the rainfall totals, mean air temperatures, and mean river flows that eventuated from December to February, in comparison with the forecast conditions.