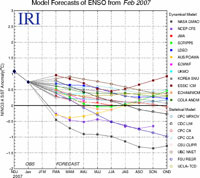 Forecasts made by dynamical and statistical models for SST departures from normal in a region of the eastern equatorial Pacific known as Nino 3.4, for nine overlapping 3–month periods.

The state of the El Niño Southern Oscillation (ENSO) is an important factor in determining seasonal climate predictions for New Zealand. However, when ENSO phases are changing rapidly, its reliability as a climate predictor diminishes, as can be illustrated by the climate of summer 2006–07.

As noted earlier in this publication, the present El Niño event, which peaked in early December 2006, has declined rapidly. Most of the international models used to predict the evolution of ENSO did not capture this rapid rate of return to neutral conditions over the last two months, instead indicating a likely slow decline of El Niño. Sea surface temperatures around New Zealand, typically cooler than normal during El Niño, have also risen quite quickly, from a mean of –0.8 °C in December to –0.1 °C in February.

While summer air temperatures over much of New Zealand were lower than normal, which is often typical of El Niño, rainfall patterns showed little resemblance to average El Niño conditions, apart from the low summer rain in some eastern North Island districts.

The figure right shows forecasts of eastern equatorial Pacific sea surface temperatures, which are used as indicators of the state of ENSO. Out of a large set of dynamical and statistical forecast models, the majority predict ENSO–neutral conditions will continue, with a 30% likelihood of a La Niña event developing in the coming months. The probability of maintaining El Niiño conditions through the next couple months has dropped to 10%.

For further advice on the development of ENSO over the coming months, see the IRI website at http://iri.columbia.edu/climate/ENSO/currentinfo/update.html