Rainfall was above average in many northern and eastern parts of the North Island and in coastal Southland. Some high falls in Northland were associated with the passage of ex-tropical cyclone Wati. Elsewhere, rainfall was below normal in Nelson, inland south Canterbury, and many western regions.

For more information on the climate in March, visit the climate summaries page at www.niwascience.co.nz/ncc/cs/mclimsum_06_03

January 2006 to March 2006: the climate we predicted and what happened 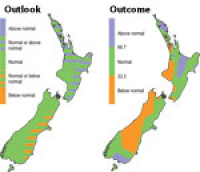 Rainfall was as predicted in many districts, but drier than predicted in western parts of the southern North Island and north and northwest of the South Island. 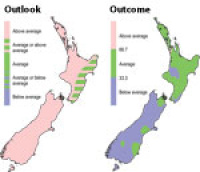 Air temperatures were as expected in the eastern North Island, but below predictions elsewhere. 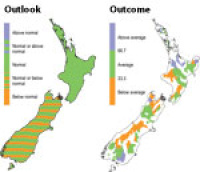 Normal stream flows in much of the North Island and coastal Southland; below normal in Taranaki, Kapiti Coast, Nelson, and the central South Island.

The three outcome maps give the tercile rankings of the rainfall totals, mean air temperatures, and mean river flows that eventuated from January to March, in comparison with the forecast conditions.