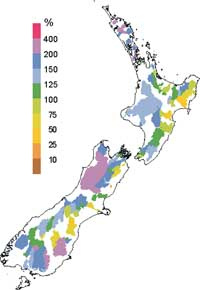 The tropical Pacific is in a weak La Niña state at present, but conditions should ease to neutral by winter 2006.

Sea surface temperatures around New Zealand are close to average or above average and are expected to remain this way until May. The average SST anomaly at the end of February was about +1.0 °C, up strongly from +0.3 at the end of January.