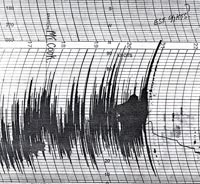 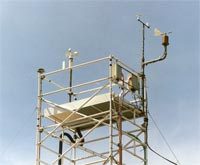 Obtaining reliable measurements, and correct interpretation of extreme winds, are challenges in understanding the strength of New Zealand’s wild winds.

Until the 1990s, wind data were mostly read from the anemograms of Munro anemometers and entered into a computer through punch cards. The mean speeds were the average over the 10 minutes before each hour.

The anemograms have mainly been preserved, although interpreting an individual event is a laborious process and in some cases unsuccessful. The charts contain a wealth of information that is not easily preserved except as a visual record.

For example, the anemogram in Figure 1 is for Mt Cook airport on 3 October 1981. This was a day with widespread high winds, and both Lauder and Queenstown airport had record speeds. Features on the anemogram include an hourly time scale, a speed scale, blotches of ink that result from shaking of the instrument, and a note that the estimated maximum gust was 99 knots. Recording failed after a power cut stopped the anemograph, but the pen continued to run over the chart because the speed trace was driven by a small generator at the anemometer cups. An upper stop prevented the pen trace from exceeding 99 knots, and so the maximum gust was likely to have been more than 99 knots.

If a wind as wild as that one occurred in a built up area today, there would almost certainly be a lot of damage to structures.

The trace in Figure 2 shows the wind at Wellington Airport on the morning of 10 April 1968 as the Wahine storm developed. The speed trace is less erratic in this case, and the gust excursions are less severe. The dips in the speed trace after 7 a.m. are not a wind effect, but are because the staff on duty were switching the anemograph on to half scale, which allows the maximum speed to be measured up to about 200 knots. The maximum gust (101 knots) is therefore preserved for this case, but was dependent on having staff available. There was a power failure, and at the extreme right-hand side of the figure the trace is broken. At this stage, the staff wound the chart on at 15-minute intervals, so that the time sequence of winds was preserved.

Munro anemometers were robust instruments, but were sometimes destroyed by winds. They are being replaced by new instruments that are stronger and have much smaller cups. The new instruments are more sensitive to light winds, so that the incidence of calms has decreased markedly at many stations.

The photograph shows the relative sizes of a Munro anemometer (left) and a modern Vector anemometer (right) during tests on Baring Head tower. It was found that not only were the thresholds at very low speeds different, but also the responses varied through quite a wide range of speeds up to about 20 knots.