The tropical Pacific is in a neutral state (no El Niño or La Niña), although sea surface temperatures near the Date Line remain a little above average.

The SOI was positive in October (+1.0), but the 3-month August to October average was near zero (+0.1). Near neutral conditions are expected through to autumn 2006.

For the coming cyclone season (November-April), normal cyclone activity is expected. For New Zealand, this means a 2 in 3 chance of a cyclone passing near the country, with Northland and Gisborne being most at risk.

The New Zealand SST anomaly was lower in October than in September, as a result of more frequent southeasterly airflows across the New Zealand region. SSTs will remain above average over much of the Tasman Sea, and east of New Zealand as far as the central Pacific Ocean. 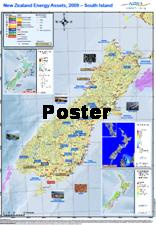 Atmospheric circulation patterns over New Zealand during November-January are likely to be more anticyclonic than usual, with enhanced southwesterly airflows over the North Island, and more frequent southerly quarter airflows over the South Island.