August was much drier, warmer, and sunnier than normal over most of New Zealand. Many northern and eastern regions of the country recorded less than 50 percent of normal rainfall.

Air temperatures were higher than usual, with the national average temperature of 9.8 °C being 1.1 °C above normal. This was the fourth highest August mean temperature since reliable records began in the mid 1860s.

For more information on the climate in August, visit the climate summaries page at www.niwa.co.nz/ncc/cs/mclimsum_05_08 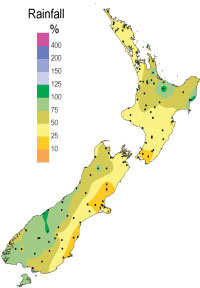 Difference from average air temperature in degrees Celsius for August 2005.

Average difference from normal August surface temperatures in the seas around New Zealand.

Monthly values of the Southern Oscillation Index (SOI), a measure of the changes in atmospheric pressure across the Pacific, and the 3-month mean (black line). Current values: August -0.9; JJA 3-month mean -0.2.

The Southern Oscillation Index (SOI) was negative in August (-0.9), due mainly to higher pressures at Darwin, but the 3-month July to August mean was near zero (-0.2).