New Zealand experienced frequent cold southerlies in June, especially over the North Island. Air temperatures were lower than normal in the east and south of the country. Christchurch Airport recorded –6.1 °C on 25 June, the lowest temperature for 30 years.

It was sunny and dry along the east coast of the South Island. Dunedin had its sunniest June in more than 50 years of measurements, while Timaru Airport recorded just 4mm of rain (11% of normal).

For more information on the climate in June, visit the climate summaries page at www.niwascience.co.nz/ncc/cs/mclimsum_05_06

Difference from average air temperature in degrees Celsius for June 2005.

Average difference from normal June surface temperatures in the seas around New Zealand. 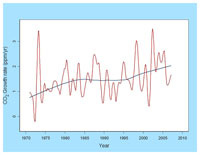 Monthly values of the Southern Oscillation Index (SOI), a measure of the changes in atmospheric pressures across the Pacific, and the threemonth mean (black line).

The tropical Pacific Ocean is in a neutral state (no El Niño or La Niña), but equatorial Pacific sea surface temperatures (SSTs) remain above average. Although this positive anomaly is often a sign of El Niño, most forecast models indicate that neutral conditions will continue until the end of 2005.

The Southern Oscillation Index (SOI) rose to near zero in June, after a strong negative excursion in May. The 3-month mean including April to June is –0.9.