April was exceptionally dry and sunny, with near record or record low rainfall in parts of Northland, Auckland, Coromandel, Bay of Plenty, Nelson, and central Marlborough. Many locations in these regions recorded less than 10 mm of rain.

It was warmer than normal in parts of Northland, but mean temperatures were mostly below average elsewhere. The cooler conditions were due to frequent clear nights, along with cold southerly outbreaks towards the end of the month.

For more information on the climate in April , visit the climate summaries page at www.niwa.co.nz/ncc/cs/mclimsum_05_04 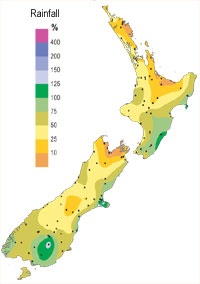 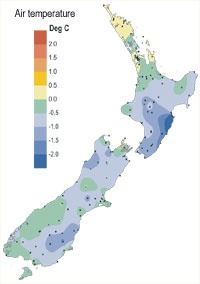 Difference from average air temperature in degrees Celsius for April 2005.

Difference from normal surface water temperatures (SSTs) in the seas around New Zealand. The New Zealand average SST was about +0.8 °C higher than normal in April, up slightly from March.