More fog than usual in Wellington

Major disruptions to the operation of Wellington Airport occurred in February and March. Although fog is not unusual at this time of year, there was more fog around this year than normal.

Fog typically forms when moist air comes into contact with a cool surface. The air cools and condenses into visible water droplets. Fogs form after radiative cooling, when the ground loses heat rapidly at night in still conditions, and through advection, when moist air intrudes over a cold surface.

While radiation fogs generally lift after daylight as the sun heats the moist air, advection fogs typically clear after a change in wind direction, with the arrival of a drier air mass.

Recent fogs in Wellington were typical of advection fogs, the result of weak southerly flows bringing low stratus cloud and fog along the east coast of the South Island, and into Cook Strait and then into Wellington Harbour.

Fog frequency data for Wellington Airport are shown in the adjacent figures. The data show that February 2005 was the foggiest February since records began in 1960 (top figure); March 2005 was the second foggiest March (middle figure); total fog hours for 2005 so far is the second highest annual total in the same record (bottom figure). 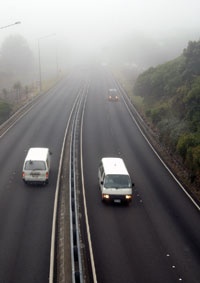