The Southern Oscillation Index (SOI), a measure of differences in atmospheric pressures across the Pacific, is a useful guide to the state of the El Niño-Southern Oscillation. However, its underlying 'message' is vulnerable to short-term pressure fluctuations.

The tropical Pacific Ocean is currently in a weak El Niño state, but there were rapid developments in aspects of ocean and atmosphere conditions in late February. These developments resulted in large, but probably short-term, changes in a number of the indicators we use to recognise the state of the El Niño- Southern Oscillation (ENSO).

Sea surface temperatures in the equatorial Pacific have continued their downward trend. Temperatures have now returned to normal near South America, although they are still above average nearer the Dateline.

The Southern Oscillation Index (SOI), a measure of the changes in the atmospheric pressures across the Pacific, smoothed over three months. The three month SOI inclusive of February dipped to -1.4, but this low index is likely to be temporary.

The monthly SOI dropped dramatically from near zero in January to about -3 in February, with the Tahiti monthly mean sea level pressure being the lowest February value on record. The 3 month mean SOI was -1.4 as is shown in the figure below. Westerly winds strengthened in the western equatorial Pacific and there were changes in Pacific rainfall patterns. The South Pacific Convergence Zone, an area of convergence between the low latitude equatorial easterlies and the higher latitude southeasterly trade winds, moved northeastward and strengthened.

These features are often an indication of a strong El Niño, but in this case cannot be separated from the recent tropical cyclone activity in the southwest Pacific, with four named cyclones passing through the area in February. Cyclones typically generate bursts of westerly winds along the equator, increase rainfall and cloudiness in the South Pacific Convergence Zone, and create lower pressures throughout the region and hence a more negative SOI.

Almost all the available international models that attempt to predict ENSO evolution indicate that the present weak El Niño will ease to a neutral state over the next three months. However, many of these models have not yet incorporated the recent developments during February into their predictions. The westerly winds have generated a subsurface 'pulse' of warm water that will reach the eastern boundary in about six weeks. Whether this will cause a resurgence of the El Niño remains to be seen.

The chance of the opposite phase of ENSO, La Niña, developing is close to zero at present and La Niña conditions are expected to remain very unlikely through much of 2005. 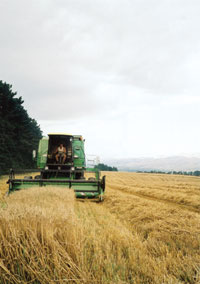 Harvesting barley in the Hakataramea Valley. A wetter than normal summer, and high temperatures in February, ensured a better than average crop. (Cover photo: Alan Porteous)