Difference from mean sea level pressure (hectopascals) in December – the month was dominated by some of the strongest westerly and southwesterly wind flows on record. Map: Jim Renwick

The year 2004 will not be forgotten quickly. Extreme weather conditions, on many occasions unprecedented in the climate record, made it a hazardous year for weather and climate sensitive industries, and may have prompted revised assessments of natural hazard risk. Some examples:

Rainfall totalling 74 mm was measured in one day at St Bathans (Otago), with reports of flash flooding in the Wanaka district. Early in the month, record high air temperatures were recorded in many localities.

The worst rainfall and floods since the 1920s caused $300 million worth of damage in Wanganui-Manawatu. More than 1000 mm of rain fell in the Tararua Ranges. Thousands of households were without gas, electricity, and water for several days. In a separate event, 30 houses were flooded in Turangi as the Tongariro River overflowed its banks. Strong westerly winds buffeted the North Island throughout the month, with record numbers of days with gale force winds.

Dargaville recorded its lowest rainfall since records began in 1943, and Paeroa its second lowest March rainfall since 1914. An unusually early snowfall in the central North Island closed the Desert Road.

Violent electrical storms caused power outages on the Whangaparaoa Peninsula. In a separate event, a thick layer of hailstones (up to 20 cm deep in places) whitened the ground in Wanganui, damaging roofs and causing disruptions to traffic.

Strong winds damaged houses in Wellington. A number of localities recorded their highest maximum temperatures on record for May.

Gales in Hawke’s Bay brought down trees and cut power to 11 000 homes.

High rainfall and a windstorm caused many slips in the Hutt Valley. Buses were cancelled, and several schools were closed. Thousands of commuters could not make it to work. Wellington Airport experienced over 20 consecutive hours of strong gale force winds, with damage to buildings, in the worst southerly storm for more than a decade.

Snowfall in Otago and Southland, and later in Canterbury, caused widespread loss of newborn lambs.

Hail storms occurred in Wairarapa and Hawke’s Bay, damaging fruit – one orchardist noting it was 'the worst he had seen.'

Gale force southerlies pounded southern and eastern areas. Snowfall occurred as low as 600 m in the South Island, with a light fall on the Desert Road in the central North Island. Temperatures were 6-8 °C below normal in many southern and eastern regions during the event. Hailstones ruined fruit in parts of Auckland, Hawke’s Bay, Tasman, and Canterbury. Many places recorded record-breaking low mean temperatures. 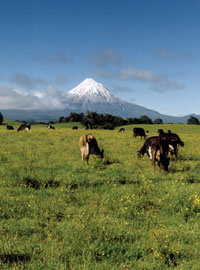