‘A great wind is blowing, and that gives you either imagination or a headache.’

This observation, attributed to Catherine II, monarch, industrialist, scientist, and educator of the 18th Century, could as readily have applied to New Zealand as to her adopted Russia.

New Zealanders live in one of the windiest inhabited areas of the world, where the wind gives plenty of potential for both resource and hazard. The wind climate of the country has been routinely monitored at more than 200 sites, as shown in the adjacent map, enabling intensive, ongoing research on how winds behave.

New Zealand’s climate is one of the best in the world for wind power generation. For example, wind speeds at Hau Nui wind farm, in Wairarapa, average 35 km/h, far in excess of the best wind farms in California or Europe. (The high wind speeds have been the prime cause of premature gearbox failures on the European-sourced wind turbines.)

Geographic information, combined with the wind data from observation stations, enables realistic images to be generated of the potentially most favourable sites for wind energy generation. It can also indicate where the greatest hazards might be, for example, for structures like power lines. 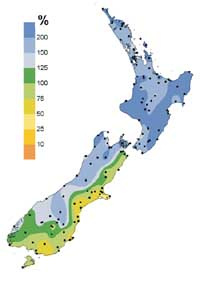 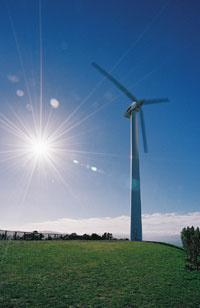