At least 13 high rainfall events have occurred in New Zealand over the past 12 months, in some cases resulting in severe floods. The worst affected areas were Paekakariki in October 2003, south Taranaki-Manawatu and Picton in February 2004, and Eastern Bay of Plenty in July 2004.

A useful statistical approach to this question is to look for any change in frequency of a given type of rainfall event, for example, the highest 1–day rainfall each year from each climate station over the whole country. From the historical climate record we can consider the 1–day rainfalls that have a 1% chance of being exceeded each year – the so called ‘100– year event’. At sites with a century or more of records, such an event will have been measured; at shorter duration sites, we model the distribution of extreme rainfalls to evaluate the likely 100–year falls.

If we consider all the observations we have of 100–year, 1–day rainfalls since 1920, we find that there has been at least one 100–year event in New Zealand in most years, and occasionally as many as five or six. Only about 10% of years since 1920 had no such event. This is illustrated in the figure below. Six 100–year events occurred in both 1924 and 1991, and three events have occurred so far in 2004. The long–term average is a little more than two events per year.

At face value, these data suggest there has been little long–term change in the frequency of extreme 1–day rainfalls.

Other measures of extreme events

This analysis of 1–day rainfalls provides only one measure of possible changes in the risk of events like this occurring somewhere in New Zealand. We also need to consider events when there have been several days or weeks of rain, and whether there is any trend in the spatial extent of the areas affected by floods. February’s floods, for example, were the most widespread that we know of since at least the 1920s.

We also need to take into account the total volume of rain over regions of the country, and the number and location of rainfall recording stations. There were more stations in the 1980s than in the 1920s, for example, and we have to make sure this does not bias our analysis. We may need to consider evidence of storms that have occurred in places where there were no stations to record them.

In addition, we need to know about the nature of each storm that brings damage. In February, there was a lot of rain prior to the height of the storm, so the ground was already saturated when the most intense period of rainfall occurred.

The impact of individual storms, even when they are meteorologically ‘typical’ in their development and intensity, can be highly variable. So, determining heavy rainfall frequency trends requires consideration of many aspects of storm behaviour. NIWA is continuing to investigate these issues. 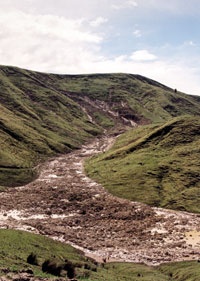