The world’s oceans and our climate

The circulation of the world’s oceans helps to keep the climate of the land masses relatively stable. Ocean currents have evolved over a long time – in spite of suggestions of near-instant climate change in the recent film The Day after Tomorrow, abrupt breakdown in ocean circulation is unlikely this century.

The circulation of the world’s oceans is driven by tidal forces, wind stress, and changes in the density of the water. The density of seawater is controlled by its temperature (thermo) and its salt content or salinity (haline). Hence ocean circulation driven mainly by density differences is called the thermohaline circulation (THC). Because of the global extent of the THC, it is often referred to as the ‘Ocean Conveyor’.

The key driver of the THC is cooling and subsequent sinking of relatively salty sea water in the North Atlantic, as shown in the adjacent figure. The cooled salty water then flows south at depth through the North and South Atlantic Oceans before being entrained in the Antarctic Circumpolar Current (ACC). Further sinking occurs near Antarctica, as cold water from beneath the ice shelves becomes even more dense as salt is expelled from the freezing sea ice.

From the Southern Ocean, the Ocean Conveyor carries the cold dense water north at depth into the Indian and Pacific Oceans, where it gradually warms and returns to the surface. Warm surface water flowing back to the North Atlantic completes the Conveyor.

Is breakdown of the THC possible?

The sinking in the North Atlantic is critically dependent on the salinity of the surface waters. As these warm waters approach Europe heat is lost to the atmosphere, thus providing Europe with its moderate climate. This ‘radiator’ effect is continuously maintained by the THC as it brings more warm water from the tropical and South Atlantic. Therefore, to a large extent, the THC appears to be self-sustaining.

There are theories that the North Atlantic sinking could cease due to increased freshwater input into the North Atlantic as a result of global warming (e.g., from more rainfall, or more rapid melting of Greenland glaciers). However, the Ocean Conveyor is very complex, and detailed studies suggest it would only be gradually weakened by global warming, and that it is unlikely to change much during this century.

Although a breakdown in the THC would have a net cooling effect on the North Atlantic, current climate models suggest there may be a warming of 1-2 °C or less in the New Zealand region, and that this would reinforce the background global warming trend. Such behaviour has been documented the last time North Atlantic sinking ceased, 12 800 years ago. At that time, the North Atlantic was plunged into a mini ice age, whereas maritime New Zealand barely cooled. 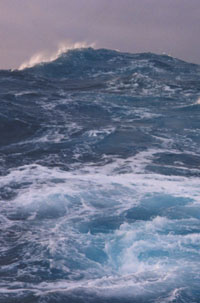