April continued the generally cold dry theme of March. Rainfall was well below average over much of the northern half of the North Island until almost the end of the month. Less than 50% of average April rain fell in Northland, Auckland, much of Waikato, the central North Island Plateau, Westland, Fiordland, south Canterbury, and the Southern Lakes district. In contrast, rainfall was well above average in parts of Bay of Plenty and Southland.

Mean temperatures were well below average throughout much of New Zealand, especially in King Country, Wairarapa, and eastern and southern parts of the South Island. 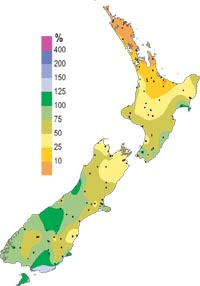 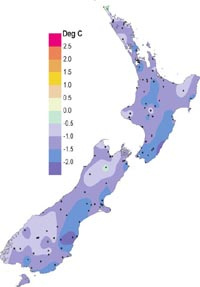 Difference from the average air temperature in degrees Celsius for April 2004. Click to enlarge. Difference from the normal surface water temperatures in the seas around New Zealand. Temperatures were generally 1–2° below average during April.