The state of hydroelectric power storage

The total potential electrical generation stored in hydro lakes in New Zealand. (Graph by courtesy of M-co, The Marketplace Company.)

New Zealand’s electricity usage rises with the onset of winter. This rise in use matches the winter increase of inflows to hydroelectric power stations in the North Island. In contrast, in the South Island, there is a mismatch. Inflows into the major South Island hydroelectric catchments fall in winter because winter precipitation is somewhat lower than in summer and because at higher elevations winter precipitation accumulates as snow. The mismatch for the South Island hydroelectric stations is particularly important because these stations have over 40% of the country’s electricity generation capacity.

As well as smoothing out flow variations between dry and wet periods, controlled hydroelectric water storages provide buffers for managing the mismatch between low South Island winter inflows (supplies) and high winter power demands. Managing the storages is a continuous juggling act. Generating companies have to balance the immediate returns provided by the wholesale electricity market against potential future returns. If climate scientists can reliably predict exceptional seasons (both in terms of precipitation, which supplies inflows, and temperatures that influence demand), generators may be able to manage storages more efficiently to achieve better returns.

The Marketplace Company provides regular updates on the status of hydro storages (www.comitfree.co.nz/fta/ftaPage.hydrology). The graph top right, from this web page, displays the total quantity of potential electrical energy held in all storages in New Zealand for the year to date. The graph also shows the average values for the time of year and the pattern of storage variations for the last three years and the extreme year of 1992. Years 2003, 2001 and 1992 were notable because inflows were low and electricity shortages occurred. Typically the total storage reaches a peak in February, following the snow melt of spring and summer which give higher South Island inflows, and reflecting lower summer usage of electricity. Storage usually is least in September, following higher winter demands and lower South Island winter inflows.

The storages were virtually full early in March 2004, reflecting the exceptional North Island February rainfalls and above normal South Island inflows. Through April the storage levels have fallen, but are still well above normal for the time of year. Shortages of the severity experienced in recent years are unlikely in the next few months. However, the predicted cooler than normal winter conditions will probably see the storages dropping steadily over the next few months. 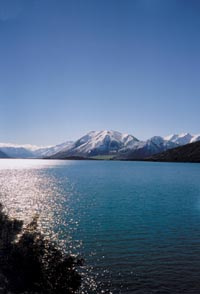