New Zealand is a group of small islands in a large ocean, and our climate is dominated by what happens beyond our shores. Research into ocean-atmosphere interactions is a key part of determining why our climate behaves the way it does. 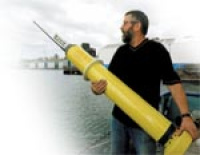 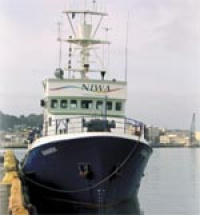 Kaharoa at Wellington prior to departure.

The ocean makes up half of the climate system, a fact that is often overlooked because we live in the atmosphere! With 2.5 metres depth of water holding the same amount of heat as the entire depth of the atmosphere, the ocean temperature can have large influences on the overlying atmosphere. Even sluggish ocean currents can carry warm or cold water great distances. A continual problem with understanding the role of the ocean in climate, and including the ocean state in climate predictions, is lack of ocean data. The ocean covers 75% of the surface of the earth, and much of the ocean is inaccessible, making measurements difficult and expensive.

A global ocean observing project called Argo was started in 2000 to address the lack of ocean information. This programme uses a broad-scale array of profiling floats to measure the state of the upper ocean. The floats, worth $20,000 each, provide real-time measurements of the temperature and salinity of the upper ocean that will help forecast climate change and events like El Niño, and improve the prediction of tropical cyclones. Each float sinks to a pre-determined depth of between 1000 and 2000 metres, where it is carried by the currents for 9–10 days. It then ascends to the surface, measuring temperature and salinity as it rises. Once on the surface, the float transmits its location and the profile data via satellite, before it sinks and repeats the process. The floats should have a lifespan of 5 years, completing about 180 profiles. Data are freely available across the internet within a day of the floats surfacing.

The aim of Argo is to deploy and maintain 3000 drifting floats in all of the world’s oceans by 2006. To date, 17 countries have deployed nearly 1100 floats.

NIWA’s research vessel Kaharoa is currently sailing from Wellington to Chile and back, deploying 61 Argo floats as part of a collaboration between NIWA, the University of Washington (Seattle), and Scripps Institution of Oceanography (San Diego). This deployment will increase the number of floats in the South Pacific by a factor of three, and is the largest single deployment of Argo floats to date. Data from these floats will be valuable because the South Pacific Ocean is particularly poorly measured as a result of its vast size and remoteness.

Climate maps and line plots of climate site observations are available on subscription from the Climate Now website – www.niwa.co.nz/ncc/climatenow. 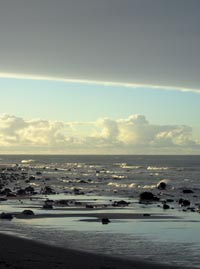