Mean temperatures were above normal over much of New Zealand. The national average temperature of 18.3 °C was 1.2 °C above normal, the warmest since January 1999, and the eleventh warmest January since reliable measurements began in the 1850s.

Rainfall was below average in parts of Otago and Southland, mid Canterbury, and Marlborough. However, useful rainfall, particularly in the last week of January, brought relief to dry soils in Wairarapa, Northland, and some areas of the South Island. About twice the average January rainfall occurred in parts of Hawke’s Bay, Wairarapa, Wellington, the Southern Alps, and parts of North Otago.

Significant rainfall and gale force southerlies occurred over the lower North Island between 18 and 23 January, with heavy falls totalling up to 100 mm in Wairarapa on 20 January.

High rainfall of 150 to 200 mm occurred in parts of Northland on 29–30 January. In Otago, St Bathans recorded 74 mm on 30 January, with reports of flash flooding in Wanaka. 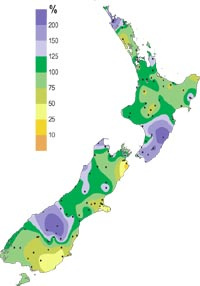 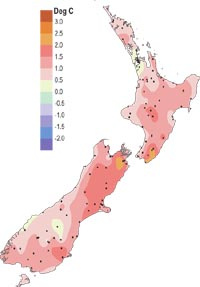 Difference from the average air temperature in degrees Celsius for January 2004. Click to enlarge.