Managing the end of a drought is an annual challenge for many New Zealand farmers. While no two droughts are identical, historical drought information, aided by astute reading of current climate behaviour, can help ease the way through the eventual end to the dry conditions.

Mean daily soil moisture deficit (mm) at Lincoln, 1949 to 2003, for soils with 150 mm of available water in the pasture root zone.

Changes in mean daily soil moisture deficit (mm) from January to February at Lincoln, for all years from 1949 to 2003, ranked from the most positive to the most negative. Decreases in the deficit (40% of cases) are shown as positive changes.

The recovery of pasture at the end of a drought depends on both the timing and amounts of rainfall received. Pasture plants that remain alive through the dry period may green up rapidly following a rainfall of 15 to 30 mm. Dead pasture replacement will depend on seed germination, requiring frequent falls of rain to prevent wilting of new seedlings.

Hence, in the present dry conditions, some pastures will recover quickly, while others will take a lot longer, and may even need to be re-sown. In either case the key factor is sustained availability of sufficient soil moisture.

Taking Lincoln as an example, the historical data from Lincoln climate station show that soils in the area are typically driest in February, with a mean daily soil moisture deficit in the pasture root zone of 120 mm. This is not much different from January (118 mm). By March the mean deficit reduces to 107 mm, and, by April, to 89 mm, well on the way to sufficient moisture for water-satisfied pasture growth.

From the historical data, we can calculate the climatological probability of soils being wetter in February than in January by examining the differences between the two months in previous years, as in the figure. Average soil moisture levels were higher (i.e., soils were wetter) in February in 40% of years.

We know now that the mean soil moisture deficit in January 2004 at Lincoln was 145 mm, higher than any other January deficit since before 1949. The historical data tell us that very dry conditions in January (deficits of more than 130 mm) occurred 19 times since 1949, and that similarly dry Februaries followed in 9 of these cases. From this we can reasonably deduce that the probability of a very dry January being followed by a similarly dry February is about 47% (or 9/19).

The art of climate forecasting is to be able to give due consideration to information like this, and then alter the odds depending on the expected influence of global climate features such as El Niño.

Climate maps and line plots of climate site observations are available on subscription from the Climate Now website – www.niwa.co.nz/ncc/climatenow. 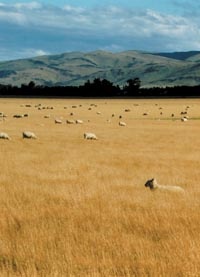 Unusually parched Southland pasture; but a green tinge on the hills renews hope of an end to this drought. (Photo: David Turner).

Unusually parched Southland pickings – but a green tinge on the hills renews hope of an end to the drought. (Photo: David Turner)