Warm in most areas

Mean temperatures were at least 1.0 °C above average in parts of Northland, Auckland, Waikato, Bay of Plenty, Gisborne, Marlborough, and Central Otago. It was also warmer than usual in Coromandel and central Hawke’s Bay, but cooler than average in parts of Westland and Fiordland. The December national average temperature of 15.9 °C was 0.3 °C above normal.

The highest temperature recorded was 36.0 °C, at Middlemarch on 31 December, the equal highest December temperature on record for the Otago region.

Canterbury bore the brunt of the exceptionally dry conditions in December in east coast regions of the South Island. Many locations in the region recorded only 1 mm of rain, making it the driest December on record. Christchurch Botanic Gardens' rainfall was the lowest for December in more than 140 years of measurement.

Dryness in eastern regions of the South Island contrasted with wetter conditions in the west and in the North Island. Above average rainfall occurred in Waikato, King Country, Taranaki, Wanganui, inland Bay of Plenty, Taupo, Gisborne, Hawke’s Bay, and parts of south Westland and Fiordland.

Milford Sound recorded 260 mm of rain on 5 December, and rainfall exceeded 50 mm in one day in Upper Hutt, Rotorua, and Gisborne later in the month. 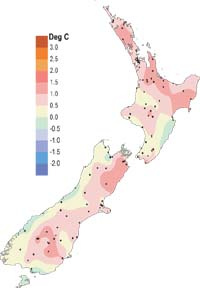 Difference from the average air temperature in degrees Celsius for December 2003. Click to enlarge.