Climate ‘normals’ for 1971–2000 are now available on the National Climate Database. The word normal is typically associated with something that is common or happens every day, but in climatology it has a meaning that is quite specific.

Monthly normal rainfall data for a selection of east coast North Island stations. The data provide for statistically valid comparisons of the climate from one location to another, and between months of the year at the same location.

Mark Twain’s alleged observation ‘Climate is what you expect, but weather is what you get’ is perhaps a good starting point for understanding what meteorologists mean by climate normals. In everyday use, the word normal typically refers to something that is frequent or ordinary. But normal in the climate context is different. It is the term used for the arithmetic mean, and other statistical measures such as the median and standard deviation, of the values of a climate parameter (such as rainfall) over a standard period, normally 30 years. Normals describe the average climate at a location.

Computing climate normals is not just a matter of analysing whatever data are available. Many climate stations have records that are shorter than 30 years, or have periods of malfunction, and therefore estimates of missing data are necessary. Other complications occur, for example, when instruments or observing methods are changed at a climate observing station, or the station has moved. It’s sometimes possible in these cases to transpose data from nearby stations where observations are highly correlated. 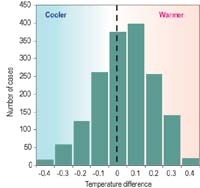 High-quality climate normals provide the basis for more reliable comparisons of the climate from one location to another than can be achieved with just a few years of record, or with records from non-concurrent observing periods.

Calculation methods for climate normals conform to international standards set out by the World Meteorological Organization, and therefore can provide reliable country-to-country comparisons.

Climate normals are also important for studies of long-term climate variability and change. The graph gives a ‘snap-shot’ of the difference between the monthly mean air temperature normals of 1971–2000 and those of the previous period, 1961–1990, for a selection of 138 New Zealand stations. The graph shows the distribution of differences between the monthly normals for these stations – a positive difference of 0.1 °C being the most common difference (for nearly 400 months). The data show that the climate of the later period was slightly warmer.

Normals that are available through NIWA on the National Climate Database are: 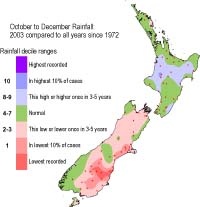 Climate maps and line plots of climate site observations are available on subscription from the Climate Now website. The map shows the relative severity of the dry conditions of the past three months in southern New Zealand.