Mostly cool and drier than normal

November was cooler than usual over most of the North Island and in the south and west of the South Island, although sunnier than average in many South Island regions. Mean air temperatures were at least 1.5 °C below average in inland sheltered regions of King Country (-2 °C), Tongariro, Fiordland, and Otago. It was also cooler than usual in many other North Island and southern and western South Island regions. Temperatures were near average in Coromandel, western Bay of Plenty, Hawke’s Bay, Wellington, Nelson, Marlborough, and Canterbury. The November national average temperature of 13.2 °C was 0.6 °C below normal. At Clyde, in Central Otago, it was one of the coolest Novembers in the last two decades.

Low rainfall in Northland and Otago

Rainfall was well below average in eastern Northland and Otago, as well as around Nelson and Christchurch, all with totals of 50% or less of normal. It was also drier than usual in Bay of Plenty and Kapiti. Above average rainfall occurred in Waikato, Taupo, Hawke’s Bay, Wairarapa, Fiordland, western areas of Central Otago, and Southland. Rainfalls were near average elsewhere.

Just 13 mm of rain was recorded at Lauder, the lowest November rainfall in the record since 1942. In contrast, the 206 mm at Hamilton Airport was the second highest since records started in 1922. 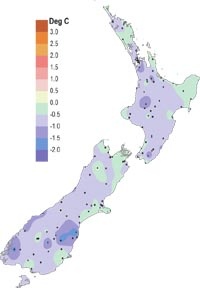 Difference from the average air temperature in degrees Celsius for November 2003. Click to enlarge.