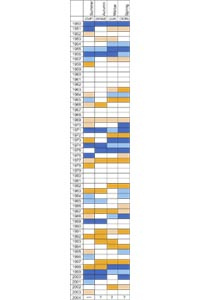 ENSO seasons based on Niño 3.4.

Although the mean Southern Oscillation Index (SOI) for the past three months has been below normal (–0.4), and equatorial sea surface temperatures are above average, the El Niño–Southern Oscillation (ENSO) is predicted to be in “neutral” mode over the summer. So how different from normal do conditions need to be, to be declared an ENSO event?

Given the very wide interest in the climate impacts of ENSO, it is perhaps surprising that there is no universally accepted definition of an ENSO event. There is certainly qualitative agreement on typical characteristics associated with El Niño and La Niña periods. El Niños are characterised by:

Improved observations now allow important subsurface oceanographic features to be identified too. For example, El Niños have higher than normal subsurface temperatures in the eastern tropical Pacific, and a deeper thermocline (the boundary between warm well-mixed surface waters and colder deep water).

However, when it comes to a quantitative definition of ENSO, and an unambiguous list of past events, there is no single agreed approach. ENSO events have been identified most commonly using either the Southern Oscillation Index or an index of tropical Pacific sea surface temperatures. Other researchers have suggested various combinations of these and other factors, such as rainfall and wind.

Any quantitative definition of an ENSO event requires choices to be made about a number of aspects, including:

For research purposes, the use of an SST index (derived from an area of the equatorial Pacific known as Niño3.4) is now the most common method for defining ENSO, at least for events from about 1950 and later. The SOI is still preferred for events earlier in the historical record. The adjacent table lists ENSO seasons based on the Niño3.4 five month running mean SST exceeding ±0.4 °C for at least 6 consecutive months (a definition that is gaining acceptance). 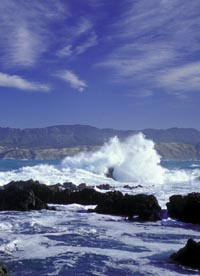 Waves breaking over Wellington's south coast. Somewhat enhanced on-shore winds are expected from the southwest over the next three months. (Photo: Alan Blacklock)