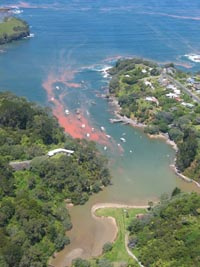 October’s climate: October was sunny and cool. The month started wet but was dry and settled from mid month. Streamflows were high in much of the North Island.

October’s river flows: October streamflows were above average for many North Island rivers.

Backgrounder: Occurrence of major harmfull algal blooms in New Zealand: is there a link with climate variations?