A month of two halves

October was wet and unsettled in many areas for the first two weeks, and mainly dry and settled for the rest of the month. Westerly winds were less frequent than usual. Rainfall was well above average in some areas, particularly Northland, Coromandel, Bay of Plenty, south Wairarapa, and Wellington. It was below average in Hawke’s Bay, south Canterbury, Central Otago, Westland, and Fiordland. A severe high intensity rainfall event on 3 October, producing 200–300 mm in the Tararua Ranges, contributed to a devastating landslide and mudslide at Paekakariki, closing SH1 and isolating Wellington for some hours.

Temperatures were lower than usual in many North Island and eastern South Island regions, and near average elsewhere. Some Bay of Plenty and Marlborough orchards were affected by frosts, and late snow in Canterbury caused the deaths of thousands of lambs from exposure. Hanmer Forest recorded –5.5 °C on 6 October, its coldest night since records began in 1906. The October national average temperature was 11 °C, 0.3 °C below normal. Sunshine totals were above average throughout much of New Zealand, especially in the south. Invercargill had its third sunniest October since 1932. 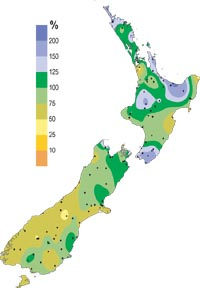 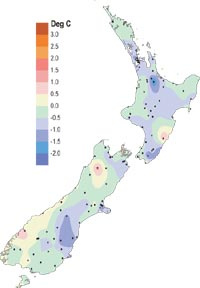 Difference from the average air temperature in degrees Celsius for October 2003. Click to enlarge.