A stormy start to spring

September was a month of extremes with stormy and unsettled conditions throughout the country. There were frequent days of westerly gales with a top wind gust of 176 km/h on 18 September at South West Cape, Stewart Island.

It was much wetter than normal, especially from Gisborne to north Otago in the east, and in Taranaki, King Country, and Wanganui in the west. Wanganui recorded its highest September rainfall since records began in 1890. In contrast, near normal rainfall occurred in eastern Southland, parts of Otago, and in the far north of the country.

Sunshine totals were below average in Northland, Gisborne, Central Otago, Westland, and Fiordland, and near normal in most other regions. Queenstown had its second lowest September sunshine total since records began in 1930.

Warm in the north, cold in the south

It was colder than average in the lower South Island, especially inland Canterbury and Central Otago. Snow to low levels in Canterbury at the end of the month brought stock losses, particularly among new-born lambs. Northern and eastern North Island districts were warmer than average, with Napier reaching 26.5 °C on 26 September. Its highest September temperature is 26.7 °C in a record going back to 1868. Central regions were near average. The national September mean temperature was 10.6 °C, 0.3 °C above average. 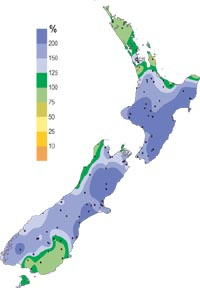 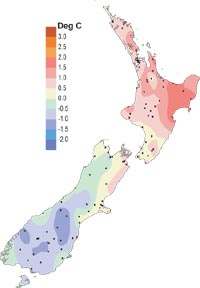 Difference from the average air temperature in degrees Celsius for September 2003. Click to enlarge.